Whether you have lived in New York your whole life, a few years, or a few months it's hard not to find a niche here and truly feel at home. Take for instance the lovely Veronica De La Cruz, Anchor and Correspondent on "America's Most Trusted News Source": CNN. Veronica De La Cruz grew up way on the other side of the country in sunny Orange County, California. She lived briefly in Toronto and Arizona before moving to Atlanta a few years ago to work at CNN's world headquarters. Veronica finally arrived in New York last year to work for CNN's flagship show -- American Morning. She says upon arriving in the Big Apple, she knew she was finally home....

Read the Interview below:

Like many of us New Yorkers, Veronica has achieved a great deal of success in under 30 years, and says she is not stopping anytime soon. Her groundbreaking on-air usage of social networking sites like Facebook, Twitter, and Myspace as well as her go-getter attitude inspired her to hit the streets of the city to get real people's opinions on hot topics such as politics, education and the economy. Veronica did it all with a tiny Flip video camera and has brought a unique way of storytelling to the forefront, and it's truly set her apart on CNN.

Despite the attention she has received by fans (she is quoted on Goldsea.com as being one of the most popular female anchors because of her legions of adoring male fans), many argue that it's really her down-to-earth approach that has made her one of the most relatable news anchors and reporters on TV. I was excited to sit down with Veronica to see what her first year living in New York has been like. 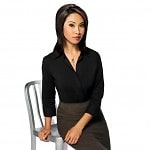 Do you feel more at home in New York, being that it's so diverse and you're mixed race yourself? Absolutely. Besides the energy of the city, that's one of the other reasons I just couldn't imagine living anywhere else. I've thought about moving back to L.A. on occasion, because I miss the palm trees and the sunshine, but N.Y.C. has so much to offer: the culture, the diversity, the nightlife.

What was it like growing up mixed race? It was difficult. I never really knew what I was or who to identify with. I was never quite Asian enough and not really white. It was very confusing for me. I got tired of checking the box marked "other" and felt like I had to pick a side. Eventually my Mom's Asian side won out. She has this huge family and is the fourth of 18 kids. We have amazing family get-togethers.

What's your favorite thing to do in New York? Favorite places to eat or go out? N.Y.C. has so many amazing restaurants. It's hard to name just one. I recently had dinner at Scarpetta, and I have to say that's definitely one of my new favorites. I also love having brunch at Merkato 55 and Bagatelle, as well as drinks at Rose Bar, Goldbar and Cipriani Upstairs. How did you get started in journalism? When I was in college, writing and music were my passions, so I figured I'd become a music journalist. While I was in school, I came across the opportunity to work for a new company called DEN.net (Digital Entertainment Network) that was launching Web-based alternative programming for Gen XY. Instead of writing for a music publication, I ended up on camera, hosting and producing a music show. It was an amazing experience that allowed me to travel around the world. It ended up launching my broadcasting career. Shortly after, I took my first news job in Yuma, Arizona, before getting noticed by CNN. Did you always want to be a news correspondent? I spent a decade of my life as a competitive figure skater, but my skating career ended due to injury. Growing up, NBC's "Today" show was always on in our home. I would always study Ann Curry. I think she's warm and passionate and very good at what she does. She's one of the few Asian-Americans on television, so she has always been a role model for me.

Do you have any projects in the works right now? The years at CNN have been wonderful, but I am excited for the next chapter in my life. One project that I'm very excited about is my upcoming documentary project. It's called GEN "O" -- generation Obama, generation Other. It will be the first ever web-based documentary that will take a good hard look at the issue of race and identity. It will also look at how a new tech-savvy generation was able to elect a president using various forms of social networking and new media. I'm collaborating with Raymond Roker, the founder of Urb Magazine and blogger for HuffingtonPost.com. Raymond and I have similar ethnic backgrounds. He's half-black and half-Jewish. My mother is Chinese-Filipino and my father is a French-German-Jew whose family escaped Nazi Germany and moved to South America. You can imagine the types of stories the two of us have to share about what it was like growing up!

What are your NYE 2009 plans? I'll be ringing in the New Year with my beloved friends in Miami. Can't wait!

Veronica is also actively involved in charities including: The Lions Health First Foundation, which provides free preventive health screenings for the disadvantaged and the elderly. She recently hosted a benefit in Las Vegas for the foundation and says she stands 110% behind their cause. She hopes one day health care and education will be completely accessible to those who need it most.

Veronica is one of the most down-to-earth, smart and attractive people I've had the opportunity of interviewing. Thanks for taking the time out V!