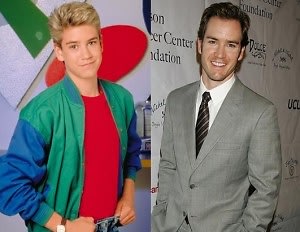 Mark-Paul Gosselaar is having an interesting year. He finished his second season on the TNT drama, Raising the Bar, he also revived his Zack Morris character from Saved by the Bell on Late Night with Jimmy Fallon and had a reunion with that same cast in a People Magazine photo shoot. He's now embarking on quite a different challenge: New York City theatre and New York City living. Mark-Paul discusses his first ever theatre role as Jake in the Off-Broadway production of The Understudy (opening November 5, in previews now), the adjustments he's made to live in New York City for the first time, and gives us advice on how to react if someone writes a tell-all book about your past....

Congratulations on the Saved by the Bell People Magazine shoot, that went over well. Probably what you meant as, "on our terms," as opposed to Jimmy Fallon's show.

Well, I didn't want it to be campy or hokey. I just wanted it to be positive so I feel the shoot went well. Some people were disappointed there was some missing cast-members but we weren't in charge of who was going to be there and who wasn't. So that wasn't our fault. My only concern was to make sure it was a positive article. I don't want to do something that I'll look back upon and say, "Why did I do that?" I'm sorry there was some negative feedback coming from other cast members that weren't included but that wasn't our call, it was People Magazine and they should have taken it up with them. I think, for the most part, they understood that but their feelings were hurt and that's understandable.

After a year of filming a television series, the Saved by the Bell reunion talk and some shenanigans from an old cast member: Is it refreshing for this new experience of New York theatre?

Yeah, this is completely refreshing. They say television is a writers' medium but this is the actors' medium. I have to completely agree with that because we're given so much time to rehearse and flesh out the characters and find new things every show and every rehearsal. It's just something I've never done in my entire career. I've been in this industry close to 30 years? I think? I guess that's kind of scary. But this is the first time I've really had time to think about the character and it becomes your life.

Considering you have never done theatre before, what drew you to The Understudy? Have you had offers before?

The truth is I've never had any offers before and I didn't have an offer on this. I actually auditioned. This was a role that came to me through my agency -- I changed agencies this year and they're not opposed to their actors doing theatre -- obviously theatre doesn't pay so agents tend to not want their actors to go and do theatre.

Your previous agency frowned upon theatre?

It's not that they frowned upon it; they'd rather have me make money. They're a business. My new agency's heavy into theatre and they're thinking outside of the box and they knew this would be something that I would enjoy.

Playwright Theresa Rebeck has been quoted as saying that her plays are about "poor behavior." Agree in this case?

I think so. The play that we're doing now, there's only three characters. They're so far apart but so close, in the core. That's what draws them together near the end. At the beginning they can't see past that corp. As the play progresses they finally realize they have these things in common and they're not so unlike the other person. She has a great way of finding the human depth in characters. We get genuine laughs throughout this whole play. You hope when you do a comedy you make the people laugh and it's not necessarily that we're giving punchlines. We're expressing a comedy through the human emotion, which isn't easy to write.

You grew up a California guy. How's the adjustment moving here to New York?

I thought it would be more of an adjustment. I've been to New York a couple times for work. I've mostly never had the opportunity to walk around the city and I didn't really understand the city -- the streets, the avenues -- I didn't understand any of that because I didn't have to. I had a bit of anxiety moving out here because I'm a big cyclist -- I race my bike when I'm not working -- so I brought my bike and thought, "How am I going to ride here?" I'll tell you: This city, for riding bikes, it's one of the best places I've ever ridden. The efficiency this city has with the subways and the walking and the restaurants and the people... I really, really like this city. What is there? Eight million people in the city? And you can just walk down the street and run into people that you know. That always amazes me.

Probably the dog shit on the sidewalks. Also, sometimes, I have to go through Times Square and it's like you're swimming upstream. That's one of my other least favorites and I'm thinking, "God, these tourists!" But I was a tourist. I'm still a tourist. 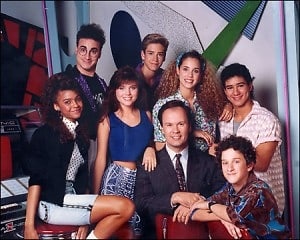 When a less than credible source is going on a "Tell-All" book tour, is the best strategy to ignore it?

Well, I don't think ignoring it, it's out there, so... I don't have anything negative to say about Dustin [Diamond, who played Screech on Saved by the Bell]. I've read some of the comments that he's made. And (pauses) it's entertaining for some people. For other people it's sort of like, "Really? That's it?" But, yeah, he's trying to be entertaining. He's extremely entertaining as hell to me. Like when he was on Celebrity Fit Club and when I heard him on Howard Stern -- I find him entertaining. And there's only so much you can do and this is just another way for him to entertain. And as long as he doesn't hurt anybody -- and none of the things he's said has hurt me; I can't speak for Tiffani [Thiessen] or Mario [Lopez] -- but as long as he doesn't deliberately try to hurt me in any way, he can do what he wants.

I probably won't buy the book. But if someone gives it to me? I'd probably take a look at it. I think from the standpoint of not buying it is just that I don't want to be a part of that because it's something I wouldn't do. I wouldn't feel morally comfortable with doing that: Talking about relationships I've had on past shows. It's like a pact. It's like a family. You don't air your dirty laundry. It's just not something I would do. If he wants to do it? Fine. I just won't support him by buying the book. But... I'd read it. I read TMZ and Perez Hilton every once in awhile, too. I'm human. I hope he makes money and I hope it furthers his career. I'll leave it at that.

To catch Mark-Paul Gosselaar in "The Understudy" buy your tickets today. Go HERE for more info.

Interview conducted by Mike Ryan, aka "Midwesterner in the City"

saved by the bell• Mark-Paul Gosselaar• The Understudy