"When a came to New York I had a bag of glitter and a vanity mirror in my hand...and they were like, “You’re a club kid we’ve been looking for you!”

Sometimes you need someone that reminds you to not take yourself too seriously, to play dress up even if no one else is playing along, to be less judgmental of people, and to let loose and engage in some good clean fun every now and then. Richie Rich has been that person for me. Don't let the ex-club kid status fool you. This guy has accomplished more than most "average Joes" out there, creating an empire that extends far beyond the Heatherette clothing line. He is put-together, articulate, and extremely charming; perhaps the opposite of what many who have heard about him imagine him to be.

When I think of New York City, Richie Rich is one of the images that comes to mind. He's also part of the reason I know this city is not dead. Last week, I had the honor of interviewing Richie, along with good friend and business partner Chris Coffee. He came wearing one of his signature hats, and an uncharacteristically laid back tshirt and jean combo. He looked great. He proceeded to give me the inside juice on all of his upcoming projects, dispelling rumors of Heatherette's end, and giving me exclusive, never talked about details on his new ventures. I will, no doubt, forever remember this rare afternoon spent on the rooftop on Bowery, getting candid with Richie Rich.

Where are you from and what was your childhood like? I’m from California, right outside San FranciscoI had the perfect American Childhood with two older brothers. Just really fun and playing outside, building clubhouses and I don’t know I guess I was a tomboy.

How did you decide to move to New York? I had this Godfather, he passed away but he was my dad’s best friend They met in the army. My family is very conservative in a way, not in a bad way, not like they’re not open-minded, but they have to learn about stuff. My Godfather wasn’t like that. He had gone out back in the day and knew Andy Warhol. He really knew the scene of New York and the underground scene. He was like an old soul. So I was doing school plays all the time, I was always the lead in these stupid plays and he would always come in from Africa or wherever the hell he was and he would encourage me to come to the east coast and discover New York. After high-school, I was a figure skater all my life so I joined the iceapades for a year and then I came to New York.

Do you miss the whole "Party Monster-club kid" scene? No, I don’t really miss the 90’s. That’s when I moved to New York and they were crazy and I have to say it was a lot different than New York now. Forget the fact that I'm more experienced and a little older, It’s also that then NY just had such an electric beat to it. Everybody just dressed up and went out. Your whole life was going out really. Even people that had real day jobs, they all went out allnight as well. Whereas now people are scared to stay out until 4 in the morning.

That whole period was full of weird experiences. There were like ten of us and we were club kids and I came into New York and they were like, “You’re a club kid we’ve been looking for you” I was dressing with eyelashes and that stuff, whatever I really felt like for the night. Never drag, always androgynous, boyish kind of feeling. Peter Pan.

Then they started really getting into drugs and I was always kind of anti-drug not because I look down on people and drugs, but it was more like what if I liked them? Looking back on it I probably would have been dead. Michael, a good friend of mine, he was the head of the club kids, he just took the wrong avenue. He got so badly into drugs and we all tried to help him numerous times and then the whole murder happened, which Party Monster is based upon. It was really hard for me. (Michael Alig is still serving time).

How realistic was the Movie? It’s really realistic. The one part that I don’t like about Party Monster is that if somebody hasn’t seen it they have a completely wrong view of me. Like the other day my friend Bonnie, I just had lunch wth her and it’s a new friendship and she’s like”Oh My God, my friend asked me at lunch if you murdered somebody.” I told them you’re ridiculous. I got wrangled into that whole world. I wasn’t there when the murder happened.

We had Heatherette at Nordstroms in Colorado and they pulled the whole line off the floor because the mother said that her son’s favorite movie was Party Monster and she thought I was the murderer. I was like are you nuts? I wrote her a letter then Nordstroms a letter. They put it back on the floor and apologized. Th movie is pretty real, it’s pretty factual. But at the same time, James St. James was so in a drug cloud that its written in a very dark kind of way, the whole movie. So I have a different view on the whole scene.

I’m doing a book with Rizzoli's right now that’s going to come out next year and it’s all my photos from the 90’s Every night we went out my roommate took my photo with people like Chloe Sevigny, Parker Posey so a lot of fantastically interesting characters.

How many of the original Club Kids are still around in your life, what are they doing? Amande Lepore is still a big way in my life. Shes great. Shes made a name for herself in different worlds. She’s doing music. I’m doing a compilation that comes out Septmeber/October. So I put Amanda’s song in there. I try to keep it cool with my old friends. Kenny Kenny is still around. Patricia Field was a club kid.

How has your style changed? When a came to New York I had a bag of glitter and a vanity mirror in my hand. I used to wear sequined hot pants with nothing else without even thinking about it. I evolved more into a glamour, boy. A lot more boyish but at the same time I’m into skinny jeans the whole new york uniform. I wouldn’t say the hipster kind of look its more like, I like hats. I like a bit of the 70’s rock and roll feel lately.

What are you listening to right now? The gossip, Mika, Little Momma, I like everybody, Lily Allen.

What was your favorite childhood toy? Well the fact that I’m a fashion designer and wasn’t allowed to play with dolls. My cousin Tracy’s dolls I was always cutting their hair and changing their outfits and she was always playing with my GI Joes even though she wasn’t a lesbian.

What is you favorite part of your body? My lips. Everybody asks me if they're fake, but they're not.

Who were your role models? Warhol. I thought the whole factory and the Warhol world was amazing. Madonna. Anyone who came to New York with a dream and got out of the underground. Also just people who represent the arts. Princess Diana. Anybody who sticks their neck out there.

If you could be any animal what would you be? A Unicorn

What are your summer plans? I’m actually working on an album right now. I’m actually going to the studio tonight.

What is you favorite article of clothing in your closet? Hats. I love hats.

Do you have any piercings? Nope. No piercings no tattoos. That’s why I love make-up so much. Because I’m so fickle.

What’s your favorite vacation destination? Hawaii without a doubt.

How many nights a week do you go out? It depends. There are times when I got out six nights a week and times I go out twice week.

If you could posses one super power what would it be? I would totally be invisible. Because my favorite color is clear, clear goes with everything. 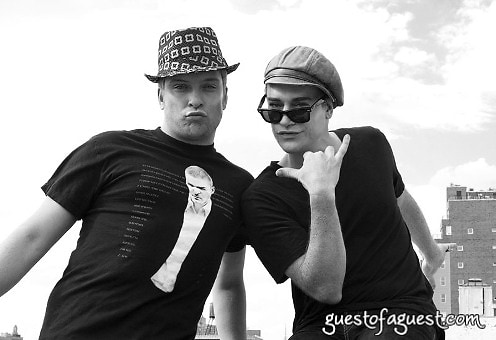 All photos taken by Etta Shon

Special thanks to Chris Coffee for helping me check "Interview Richie Rich" off of my life's "to do" list as well as Katie Brynes for transcribing.