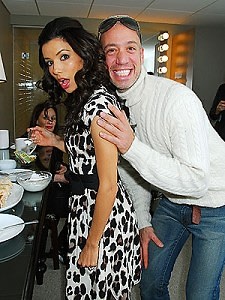 New York's Robert Verdi has a fun new show called She's Got the Look on TV Land this summer season, where he plays a kinder "Simon". The show takes women over age 35 and puts them through the rigors of a Tyra Banks-like modeling competition. The lucky winner receives a Wilhelmina Modeling Contract and a feature in SELF magazine.

You can find this oft-amusing show on TV Land, Wednesday's at 10pm. The fun part is watching the transformation of these mothers, wives, lovers and friends. Of course it wouldn't be a good reality show without a terrific amount of drama - can you imagine your mother/grandmother (the oldest contestant is 63!) living with 9 other mothers from all over the country? It's an entirely new level of entertainment and you get the bonus of host/80's covergirl, Kim Alexis with judges Sean Patterson (Wilhelmina President), Beverly Johnson (ex-supermodel) and Robert Verdi. The tagline - "Congratulations, you are on the board."

For those of you that don't immediately recognize him, Robert is a New York staple and fans love to stop him as he walks down the city streets. He is known for his TV work on "Full Frontal Fashion", "Suprise by Design" and a little movie called, "The Devil Wears Prada". Robert is also a well-known personal stylist for clients like Eva Longoria-Parker, Hugh Jackman and my personal comedic fave, Kathy Griffin. He makes the show fantastic and you will laugh out loud watching it.

I asked Robert to dish at his Aveeno sponsored Luxe Lab party this week for the premiere of "She's Got the Look".

Which of you is truly the toughest judge? Beverly is tough because she's a real insider and she has a sixth sense as to whether or not someone can really take pressure. Beverly immediately recognizes that talent.

Which photo challenge is your favorite? There was a mock jewelry campaign...you know I love expensive jewelry. I was a goldsmith back in the early years of my career and it is truly my passion. The jewelry photo shoot was a turning point and it made the competition the hardest because each woman had such an incredible result.

We know you can't share the winner, but can you tell us anything about her? It's true for every woman along the path of this show - each one had big personal issues and were at a juncture in life where they were shedding skin and becoming their authentic self. The winner embodies that most.

You always have something cooking, so what's next for you? QVC! I was trained as a jewelry goldsmith. Jewelry is my personal obsession and in my styling it is my favorite part of getting the client dressed. Jewerly makes an outfit - it's exciting People think I'm a people person but I'm actually happiest at the jewelry bench. For QVC I'm doing a collection of jewelry - signature Robert Verdi style. I love incredible basics you can wear over and over again. A really long unique chunky link necklace that can be wrapped around your wrist a few times or draped as a long flapper necklace.

"Jewelry is more dependable than a man." Robert Verdi