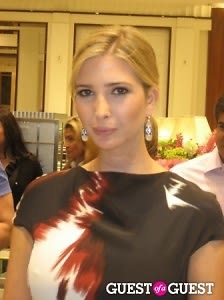 Last night at Saks Fifth Avenue, we caught up with Ivanka Trump at a private cocktail reception to celebrate the debut of her fine jewelry collection. As we spoke and swilled champagne, Ivanka confessed why her husband, Jared Kushner, didn't watch their Gossip Girl appearance with her.

Turns out homeboy was bro-ing out and taking in the game.

She couldn't quite resist the urge, though, to give him occasional updates as he focused on the gridiron that evening.

"I stopped it several times and told him they were referencing The Observer or it was his cameo, and he was preoccupied with the Giants game," she said.

She said the producers had approached her in the past about an appearance on the hit series, but she had been unable to juggle the logistics with a full day-planner.

"They had asked me to do it several times, but it's not so easy to take half a day off in your schedule. But it was the dog days of summer, and I was able to arrange some things."

As people milled around the first-floor jewelry section of the iconic flagship store, Ivanka explained how her line is sold in retailers across the country and now reaches lower price-points, with certain pieces starting at $500.

In parting, she praised the success of Trump Soho:

"It's winning awards left and right," she said.

But what's the hottest element we wondered?

She then flitted away to schmooze with gal pal Wendi Murdoch.