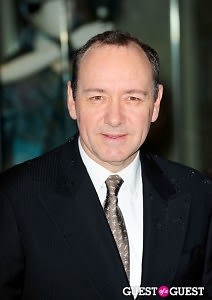 When we caught up with Kevin Spacey at a special screening for his newest movie, "Casino Jack," he seemed completely unfazed by the recent storm of rumors circulating around the web regarding his sexuality.

At the screening, hosted by The Cinema Society and The Creative Coalition, we were uncertain about how to approach Spacey given the press overload he's had of late circulating through the interwebs.

Initially, seeing as how he got defensive when his Daily Beast interviewer, Kevin Sessums, implied he was gay, we decided it best to steer clear of the issue, at least until later on in our chat. Interestingly, that didn't stop him from addressing, albeit indirectly, the rumors right off the bat.

When we questioned Spacey about the "Casino Jack" central characters (who are based on real people involved with a D.C. corruption scandal) and whether any of them were humanized through the film, his response took on an interesting tinge in light of the recent rumor mill surrounding his sexual orientation:

"Well, I think, look, at the end of the day we have to recognize that there is a kind of 'lazy journalism' that just keeps repeating the same thing about people until it becomes true. And I think that every person is a human being, and if some people make good choices and some people make bad choices, we just have to try to remember that, as difficult as it might be, and as easy as it is to stand and judge people, we have to try to have some degree of empathy for our fellow man."

Wait, is that even in response to the question we just asked about "Casino Jack," or was he talking about something entirely different in a subconscious response to the past day's press reports?

It looked as if he'd decided to stick with remaining ambiguous about his sexuality by continuing to send mixed signals. On the one hand in his statement,  he criticized the press for being lazy and for manufacturing truths--whether or not they really are true. On the other hand, he seemed to substantiate those truths by requesting "empathy" for "our fellow man," which seemed to be self-referential.

Is this another oblique admission to being gay without fully coming out and saying it?

PerhapsSpacey has chosen to reside in the U.K. to escape the American gossip mongers. Moving past the swath of gay-related questions, we asked whether, in light of his acceptance in the U.K. where Prince  Charles named him "Commander of the British Empire, he would attend the wedding of Prince William and Kate Middleton.

"I don't know," he said. "So far, I haven't been [invited]. But I don't know when those invitations go out. It's not until April, so who knows? Perhaps. If Snoop is going to perform, maybe I'll perform."

Concerns over that lofty invite can way, he said; he's most focused on the immediate issues of his acting career and the special significance attached to his Golden Globe nomination for this film.

"I was extremely over the moon, very surprised, because the film hasn't opened yet," he said. "But luckily, the Hollywood Foreign Press had either watched the screenings or gone to screenings. I was very delighted that we managed to be recognized. And for me, it's attributed to George Hicken, my late and wonderful director. He directed me to this performance, so it's about George."

In light of his appreciation for those who have shaped his own career, he's enjoyed the opportunity he's had lately to groom new film stars. For his next film, "Margin Call," he worked with young talent like Penn Badgley and director J.C. Chandor.

"Working with emerging talent," he said, "is always very exciting to celebrate, because I always look back and will never forget that if it weren't for first time directors and writers and producers, I wouldn't have ever started making movies."

As he moved to enter the theater, he ended with weighty thoughts on the film's political implications and the dysfunction he sees in government:

"The movie is about the fact that we have put our politicians and our system in a situation where they have to spend so much of the time raising money for TV ads that they have little time to serve. And maybe that needs to be examined. But I suspect that if we leave it to the politicians, nothing much will happen."

It seemed his distrust of Washington mirrors his hesitancy toward the press, which is still coming down from the tizzy of excitement over the obvious and, ultimately, inconsequential. A full week of personal prodding from the press can be a bitter pill to swallow.  Perhaps the Grey Goose cocktails everyone drank at the Setai Fifth Avenue Hotel & Residences helped the medicine go down a little more smoothly.