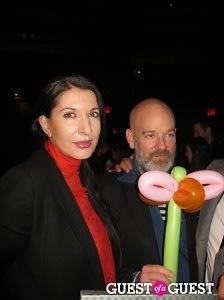 "Well, I wouldn't have used that terminology," she said of  "Asshole," before expressing general approval of the show.

The evening commemorated the deaths of some major artists such as Jean-Claude and Louise Bourgeois, but Abramovic was undeterred when discussing her plans for her own funeral. "The Life And Death of  Marina Abramovic," a play by Robert Wilson that chronicles the fictionalized demise of the performance artist, will premiere at the Manchester Festival this spring and feature acting from Willem Defoe.

Abramovic's life will be re-written in the play as if in a continual theatrical Samsara. Her comfort with the thanatological stems from her own belief that death does not mark a finality.

"I believe in the after-life, all of that, reincarnation," she said.