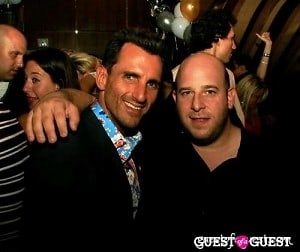 Marquee is a 27th St. club die-hard, mysteriously outlasting the mass-decline of boites on that strip. Noah Tepperberg, the co-owner and co-founder of Strategic Group who launched Marquee,  has bottled the secret to venue-longevity and discussed with us his formula for success.

Tepperberg and his partner, Jason Strauss, are no strangers to nightlife dominance; as the brains behind LAVO (in Las Vegas and New York) and Avenue, they have built a reputation as the originators of bottle service (at least in its iteration.).

But Marquee, with its resilience to the economic vicissitudes that brought other clubs of its generation down, may be the jewel in Strategic Group's crown. With tonight's seventh-anniversary milestone, Tepperberg in our interview painted the portrait of a club constantly adjusting to the needs of its clientele and maintaining its core character and integrity while expanding to new heights. Find out about the birthplace of bottle service and discover Strategic Group's ever-expanding empire.

GofG: So seven years! Did you think you'd last this long? What sort of accomplishment does this represent for you?

NT: Our company began  with the intention of running our business for the length of the lease. So we had a fifteen-year lease, and we plan to be there for fifteen years, you know, the whole time from the beginning, so seven years is about halfway. Over the years we've renovated the club a couple of times. You know, we've continually changed it. But, you know, what it is over the years is another story. My answer is we signed a fifteen year lease, we plan to be there for 15 years, and we're half way there.

GofG: What do you view as some of the greatest nights in the club's history?

NT: The night of "The Departed" premiere with Mick Jagger and Jack Nicholson and Leonardo DiCaprio and Mark Wahlberg and Mark Antony and Janet Jackson… and I'm forgetting a few. They were all there, and it was amazing.

The night that Stevie Wonder found the DJ booth and sang a couple of songs including "Isn't She Lovely" and "Happy Birthday" was amazing.

The night that Diddy came in with the Olympic torch lit up was a really memorable night. I can give you a pretty long list… You know, the night that we had Fergie sing my partner, Jason, "Happy Birthday." That's something I'll never forget. You know, all the nights with the DJ spinning there I'll never forget. All the Halloween parties, from Justin Timberlake to Nick Cannon to Mariah  [Carey] to Heidi Klum -- I'll never forget those. All of our anniversaries have been amazing, every year. All of my birthday parties I've thrown there. All of my friends' birthday parties.

GofG: What can we expect from Tuesday? What's going to be special about the anniversary?

NT:You know, it's a combination of the anniversary and a holiday party and a toy drive we're doing. So I think that we're going to have a lot of old faces. It's a chance to see a lot of people we haven't seen in a long time, all in the same place. A lot of the memories relived, probably.

We're really excited to have Calvin Harris play in the room. You know, over the years, as our industry has evolved, the type of music that the DJ plays has evolved, and the type of music that people want to hear has changed; people's tastes have changed, and Calvin Harris is a really good example of someone who represents what's hot now and what people want to hear. I'm really excited to hear him and see him perform in Marquee of all spaces.

GofG: What do you view as your influence on the bottle service trend, and how did Marquee contribute to this fixture in nightlife?

NT: I think Marquee really defined the word "service". You know, when you think of bottle service, people think of bottles; I think of service. And I think what we did at Marquee, which was really pioneering, was we really gave our customers that were buying bottles real service for their money. And, you know, the idea of just an impeccably clean place with fast service, always having fresh ice and clean glasses and fresh fruit, and personal space, and a doorman, and a host, a New York name, a security guard that walked you in and out, you know, all the things that we did over the years to perfect that word "service" is really what we pioneered with that. People were buying bottles for a long time before Marquee at nightclubs, but people weren't paying for the service that they got. Like, they did it with us.

I think people would -- you know, I'm a customer, I would go to clubs before I opened Marquee, and I'd buy bottles and I'd find myself waiting for the liquor and waiting for a waitress to bring me glasses once I had the bottle and waiting for the check to arrive at the end of the night. You know, having to ask random people to move over to give my group space. I was just never satisfied with the service I got going to other clubs. And I think that when we opened Marquee, we really spent a lot of time personalizing the service, training our staff, and that's where we got it from. Just years and years of going out to clubs. I spent ten years traveling the country and the world going to all the greatest clubs and working in clubs. I ran a dozen clubs before I opened Marquee. I really learned from every place that I went to and worked at.: Suite Sixteen, Eugene, Spice, Pita, Expo, Kit Kat, MK.

NT: I really think the secret is the team. You know, I have my sister, my base, my biggest secret weapon is probably her, Judy, who's been a real force behind the place since it opened, making sure that everything gets done, that nothing falls through the cracks. My manager, Rich Fleming, he started as a bus boy; he's now the general manager of the place. He's been there every day since it opened. My door staff has been there since it opened. My host team, Ed Goldberg and John Gallagher, my banquet and office manager, Amanda Smear, she's incredible. Our corporate event business, definitely a big part of our success. And then the space, the fiscal product itself. It's a superior space to any club in town. It's wide, it has high ceilings, columns, multiple rooms. The product always sells if it's good.

GofG:But Marquee has jumped many of the economic hurdles that many clubs have faced in the past few years. What do you think is contributing to your ability to stay afloat?

NT: I just think our intention to service and details. It keeps customers returning, even, you know, years after work, they're new. And I think our operation. The way we operate, and watch our customers. We're plugged in to what goes on in our clubs every night, so we're really able to make decisions quickly and fix things when they're broken quickly and fix problems before they start. And I think that's what really kept us going all these years, far longer than probably any space that's currently open. If you think about it, I don't believe there's a club right now that's been open as long as we have.

Name one. I'll give you a free bottle.

Think about it, all the clubs that opened when we opened have all shuttered. All the ones that opened after we opened, a lot of them have shuttered too. We're the only ones on that block.I mean the business has been cyclical. It always has been. It goes up and down and changes over the years. That's natural for any business.

GofG: What do you have in the way of upcoming projects?

NT: A big one is we're opening Marquee Las Vegas on New Year's in two weeks. One of the biggest night clubs in the county in a brand new, beautiful resort called the Cosmopolitan of Las Vegas.

GofG: Do you want to expand your New York empire?

NT: Yeah, we're always looking to grow. Obviously, we have our Artichoke pizza business with Francis Garcia and Sal Basille. We're looking to expand there. We've opened two spaces in the last three months, and we have our eyes set on a couple more. Lavo. We have Las Vegas in New York. We're looking to probably, maybe at some point expand that. But for right now, we're really just focused on Marquee Las Vegas.