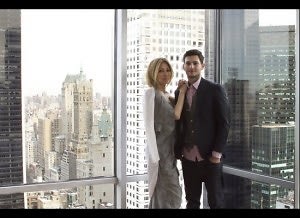 What do Jeremy Piven, Denzel Washington, Will Ferrell, Steve Carell, Usher, Glenn Close, Renee Zellweger and Ashton Kutcher have in common? They all rely on the world-renowned designers at Vacca to land them on the “best dressed” list.  We sit down and talk to the designers about everything fashion.

When I just came to the United States, I started working for a company called Burberry. It was a very interesting experience for me, with a very tough boss. It was interesting to see them going through the transition from very classy and conservative to super high fashion. It was the beginning of me liking both, the very classy, conservative, timeless work and the very fashion forward.

After that I ended up at an even more conservative company, Turnbull and Asser. I loved the concept. Prince Charles was wearing it, Sean Connery wore Turnbull and Asser in James Bond. So there was the allure to it, but I always found that I needed the fashion part.

The Making Of Vacca:

And then I met Domenico, and in comparison to all the people I worked with, I felt that he was exceptionally talented and had a unique point of view that I didn’t see anywhere else. His work had a very timeless look, but in a way that was appealing to young people. It was definitely a great journey, but I just felt that I missed fashion. You will still see me in a pinstripe suit and a white shirt and enjoy it just as much as something more edgy or fashion forward. I think within Vacca we have room for both.

Julie says that had it not been for Domenico, she doesn't think she would have had the courage to start her own label alone.  "Maybe when Robert got older I would have done it with him, but just me by myself, I don't know.  I would have loved to, but I prefer working in a team."

This company is the epitome of a family business. Mother father and son all share very large parts of the responsibilities; so how is it to work so closely with your family?

Robert: It’s interesting to say the least. One, I respect my mother a lot. I work more closely with my mother than with my father so it’s interesting to watch her work and to learn from her. In this situation it’s less of a boss/employee thing, it’s more like coworkers, where you’re both sharing ideas, you’re arguing and trying to convince each other, whereas when it’s parent/child, its more “you’re going to do this because I said so” At the end of the day, she’s one of the people I look up to for how she runs a company.

Julie: I definitely consider myself a lucky person, working with my child. Obviously I adore my child, and he’s very smart.  He steps to the plate when he needs to, and he works with people who are double his age. We collaborate a lot and I think we are a good team. Of course we butt heads, but neither of us holds a grudge for a long time, and we just apologize. I consider him my best friend.  Even if I have opportunities to hang out with other people, I would choose to be with him.

The team may not be together forever. Robert is currently pursuing his MBA, and says he does not intend to stay in the fashion industry forever.  He says he is interested in finance, but

I could definitely see myself returning in the future to turn the brand into something else, something more global, that doesn’t just deal with fashion, just more of a luxury brand.