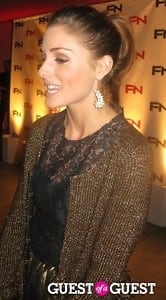 Last night at MoMA, self-branding all-star Olivia Palermo, who has snatched pseudo celebrity from the fateful jaws of pampered anonymity, philosophized on this peculiar notoriety when we spoke before the 24th Annual FN Achievement Awards.

Palermo, who gained fame when she sued the website SocialiteRank.com for publishing a letter she allegedly wrote asking for acceptance within celebutante circles, stoked the embers of her fame as a cast member on "The City." In preponderance of this recognizability, though, we wondered whether it's all been more curse than blessing?

"I don't think of it as either way, you know," she said, the spitting epitome of blunt eloquence. "I focus on my business and my career. And being in the media is part of my career, and I take it. And if someone wants to take my picture, it's a nice compliment. I don't look at it in a burdened or a nasty way. You know, I'm a positive person, and I don't look at things like that."

But isn't there a stigma to having this reality fame?

"I really don't think like that," she continued. "For me, I just focus on myself and not the media aspect of it all."

But there's something of a hypocrisy to her gimmick; she knows the media coverage is crucial to grooming her persona (fluffing the unfluffable, the lack of substance there), but she's gained a reputation for reticence since the New York Magazine piece ran on her about the aforementioned lawsuit. She walks the press line to stay in the news--perhaps we're guilty of continuing the vicious cycle--but gets gun shy when a recorder is near.

Of late, she said, she's been doing press for Mango, as her main-squeeze, Johannes Huebl, and she are the faces of the company's holiday Look Book. Sticking to her elusiveness, she slipped inside the party.