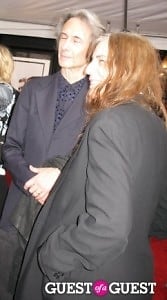 As we've written, the Chelsea Hotel is being sold, but singer-songwriter icon Patti Smith has no qualms. She told us at The Ziegfeld Theater for "The Next Three Days" premiere that she's been too busy nerding out for her new album.

To avoid addressing that era-gone-by, she's currently finishing a record with Lenny Kaye that addresses current events, literature, and theology.

"The album reflects things that I've been studying about," she said. "You know: our environment. Russian literature, St. Francis of Assisi. The usual stuff." 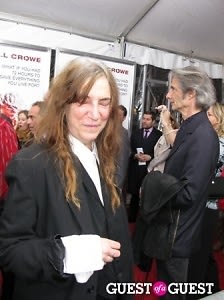 As far as Russian literature goes, she's focused on Nikolai Gogol (with a particular affection for the story "The Overcoat") and Mikhail Bulgakov (with a particular taste for The Master and Margarita, a darkly satirical Soviet novel).

But if you think she got too exceedingly literary on us all of a sudden, fret not; she still has an anti-establishment vibe, even if expressed in a curmudgeonly iteration.

"I'd say that my biggest lament isn't what's missing, but what's been added," she said of changes in New York. "The credit card, I think it's one of the worst things that has happened to our culture."

And with that she traipsed off to be closer to the Russell Crowe pandemonium on the red carpet.