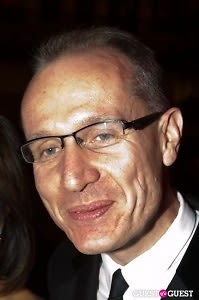 When we caught up with Wendi Murdoch the other night, she declined to talk about The Wall Street Journal. So when we saw Robert Thomson last night at the New York City Opera Fall Gala at the David H. Koch Theater, we thought we’d get our fix:-

In the treacherous and dynamic period of journalism, we wondered what keeps Thomson coming back every day.

“Well, The Journal, unlike many papers is very successful at the moment,” he offered. “The digital presence is expanding in this country and globally.”

He reiterated his belief that the on-line sphere is actually cultivating an expanded readership for The Journal given the topicality of its financial coverage.

“The great thing is that even though we’re in an era of mass media, mass migration of audience, our relevance to readers is increasing rather than diminishing,” he said. “That’s a very fortunate place to be given the demise of so many old great newspapers.”

Is it the vitality of this information that allows The Journal to charge for on-line reading, and does he plan to expand this trend?

“We have obviously a pay wall on the site itself,” he began. “What we’re most interested in doing is developing content verticals where for specialist readers and specialist audiences, you pay what you might call specialist prices, so that the more we customize content, the more we’ll charge you. It has to be defined by relevance to a very professional, knowing, discerning reader.”

Cultivating and focusing in on these niches readership where the content provided increases in value based on specificity and rarity has given The Journal the pay wall success capabilities over The Times.

This has become the case to such a point that Thomson doesn’t really view The Times as The Journal’s main competitor.

“To be honest, I guess I really don’t,” he said. “These days…you think about your competitor set much more than in the old analog age of ‘it must be this paper or that paper.’ The competitor set now is the web itself. It is readers who never had more choice, and they’re very choosey. And so that’s how we’ve been—our greatest competitor of all is time.”

Thomson wants to make The Journal the most relevant and important while other means of news and information are competing with the limits of a reader’s schedule.

“So we have to make sure that when people are with The Journal,” he said, “they’re maximizing the usefulness of the experience. So it’s not a binary—New York Times, Wall Street Journal.”

But what about the spats between Thomson and Pinch Sulzberger? Those were kind of fun, no?

“That was just argy-bargy at the time of launching a new [Greater New York] section,” he said.

But Thomson admitted that the journalistic trash talking was a call for attention, a nimble tactical decision.

“And naturally there’s always…essentially, in a sense, it’s marketing to be honest,” he said of the quarrel. “And so it’s all in good-natured fun. Everybody understands the nature of those conversations. And faux-conflicts.”

“Argy-bargy?” we could only muster.

“Is that an Australianism?” we asked.

“No, it’s originally Scottish,” he smiled. “Australians use it a lot.”

He continued on into the party where Princess Alexandra of Greece and Vera Wang mingled.