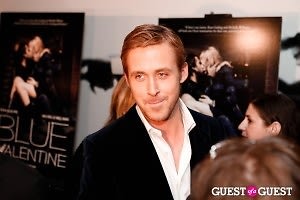 We caught up with Ryan Gosling the other night while he was busy promoting "Blue Valentine" at the Quintessentially and Stoli screening to discuss ice cream, his co-star Michelle Williams, what NC-17 means and the ever-pressing question of why love fades.

The flick took 12 years to get made. Once finances were set and filming began, Gosling and Williams lived together for a full month to make their relationship as authentic as possible.

"We fought all day, we had Christmas and birthdays, we went to Sears and took pictures, we did Jane Fonda workouts , we did everything you could do in that month. We built some memories. Working with Michelle, I felt like Scottie Pippen, you know? And she was Michael Jordan. Every time I gave her the ball she just flew through the air and slammed dunked."

They both gained weight to depict themselves in the later parts of the movie, going from young lovers to a married couple who can barely stand to be in the same room. Gosling couldn't remember how much he gained, around--14 or 15 pounds-- but did say Williams gained more than he did. To take it off post-shooting, he didn't have to work that hard. When asked if he ran or exercised, he said it was actually easier than physical exertion:

"I just stopped eating so much ice cream."

But the flick didn't just add on to the actor's psychical weight; it was also emotionally heavy. The tale of falling in and out of love is told with painstaking reality and ponders the depths that relationship baggage.

"I think that most movies pretend that they know everything, you know, and this was a film that wasn’t pretending to know anything, it was just asking a question, a question I think we all ask ourselves. What happens to love? Where does it go? Why does it go away? We spend our whole lives looking for it, and you finally find it and then you know once you move in 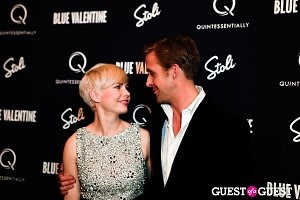 together and you guys share the same bathroom, suddenly it goes away: why?"

There are sex scenes in the movie that steered the Motion Picture Association of American toward an NC-17 label.

"I feel like, look, people don’t know understand what NC-17 means. Its not like we’re saying we think kids under 17 should see the movie. I don’t think so. What NC-17 really means is that it can't play in regular theaters. And you can't even show an ad for it on television. I don’t think it deserves that."

Luckily, others agreed. The MPAA has unanimously voted to overturn the decision after a personal plea from Harvey Weinstein.