On Monday night, a group of celebrities including Julianne Moore, John Reilly, Brooke Shields and Samuel L. Jackson participated in "Starry Night Stories," an event to benefit the children of Bellevue's "Reach out and Read" program. We used the opportunity to chat with Samuel L. Jackson on children's books, new movie projects, and the darker side of Leonardo DiCaprio... 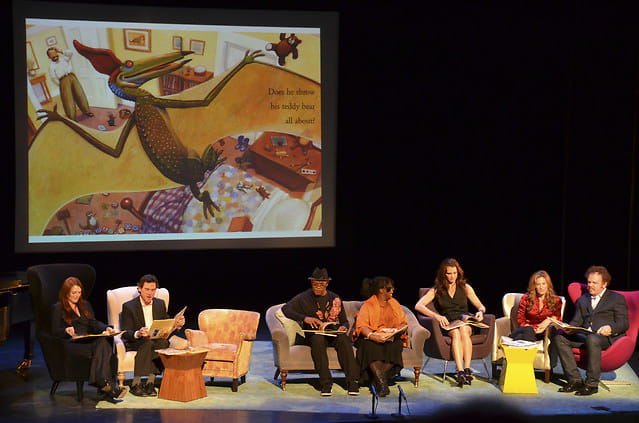 What types of books did you like to read as a kid growing up? [laughs] I actually read classics when I was a kid. I kind of bypassed all the kiddy books.

Like Homer? I read things like 20,000 Leagues Under the Sea or Around the World in 80 Days... Three Musketeers. I started reading very early. I was about 3 or 4 when I first started to really read, and then I got all these other books. My aunt was a 4th-grade teacher, so.

Did you know young that you wanted to become an actor? No, I had no idea I wanted to do that. I was an only child, so books were sort of my refuge. I started to read comics for a while, and my mom said, for every 5 comic books I read I had to read a classic. So I got wrapped up in reading books that way.

Sounds like a fair trade. Not bad at all.

How did you get involved with narrating the book, “Go the Fuck to Sleep”? I’m not really sure. It’s sort of a fortunate accident. My agent came to visit me on set, and he had it on his laptop, and he said, “Have you ever seen this book?” And I read it. It was kind of funny. I emailed it to some other people, and I went home for a weekend and I got a call from my manager saying, “These people want you to narrate their book. I don’t know if you’re ever heard of it?” And I went, “Yeah, I just read it last week.” “Well, they want you to narrate it. Do you wanna do it?” “Yeah, I’d love to.” And I just ended up doing it.

Do you think it’s because you’re known for your ways with curse words? It could be. Possibly.

I mean, everyone knows “get these motherfuckin’ snakes off my motherfuckin’ plane.” The books could use some attitude, without a doubt.

Do you think you did it justice? I don’t know... maybe somebody could do it better, but I had a good time. 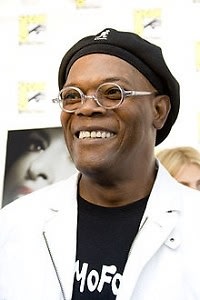 I think you might be the best. [chuckles] This group in New Zealand was trying to ban the book from stores because they thought it would end up in the hands of kids.

Do you think that’s ridiculous? Pretty much. I mean, kids read what they wanna read, they get a hold of what they want anyway. They watch movies, they watch television shows. They play violent video games. Words are words, and once you become smart enough to know what words are and what they mean, it doesn’t matter what they are as long as you use them the right way.

So you’re going to be playing a “slave who is the right-hand man of a sadistic slavemaster” in Django Unchained. I’m always excited to work with Quentin. I’m looking forward to that. I’m playing Martin Luther King on stage now, so I’ll go from the most beloved black man in the history of all time to the most hated negro in cinematic history. So it’s gonna be a good leap for me. I’m going to have a good time.

How do you balance that mentally? No such balance. You just gotta do it.

It seems like Leo DiCaprio is playing an evil character too, which is unlike him.

I just think of him in Inception and Titanic as the good guy. Really? Hm. You ever seen Basketball Diaries?

No. You gotta watch the other side of Leo too. He’s got a dark side.

I trust that. Has Quentin told you details about the film? I read the script. There’s not much else you need to know. You read the script, you kind of go, “Ohhhh, okay.” And you just gotta run with it.

Do you think it’ll be as iconic as Pulp Fiction? It may end up being that, but right now. I’m pretty sure it’s going to be controversial. [lets out a little cackle]