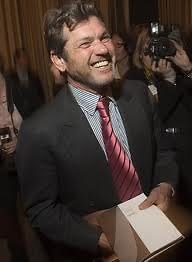 At last night's Norman Mailer Center Gala, I had a chance to speak exclusively with Rolling Stone publisher and co-founder Jann Wenner. In something of a response to Tina Brown's attempted Newsweek takeover, Wenner tells me what it takes to make it in print journalism. Check out the his advice below...

Wenner cited the Michael Hastings article The Runaway General as indicative of the shrewd brass-tacks reporting that nets larger political ramifications--journalism with real-world change potential. Of the July piece he said:

"It let us set the bar a little higher, that's what it did. That's what it did. It gave us a little more impetus and enthusiasm to see what the impact of a strong piece like that can have and with the reactions, we just said, 'Let's step up our game.'"

With the Daily Beast's Tina Brown and magazine scribes like Michael Wolff standing nearby across the way from the bar, Wenner eschewed any apocalyptic visions of print journalism and stuck to his guns about staying true to old virtues.

"I don't subscribe to doom and gloom at all," he said. "What keeps us alive and going is really a commitment to traditional magazine values — you know, great photography, design, reporting, writing."

Wenner feels the posturing and contrived quirkiness in light of web journalism will do in traditional publications trying to match that style and tenor.

"And those magazine that are going to be in trouble," he pontificated, "are those that feel they have to abandon it and think they have to package their magazines into some new internet, kooky, funny way. But magazines that are gonna be read...if you're a magazine of high quality, you'll be fine."

He strode confidently onward into the party, unfazed by the mortality of weeklies and secure in the position of his media companies.