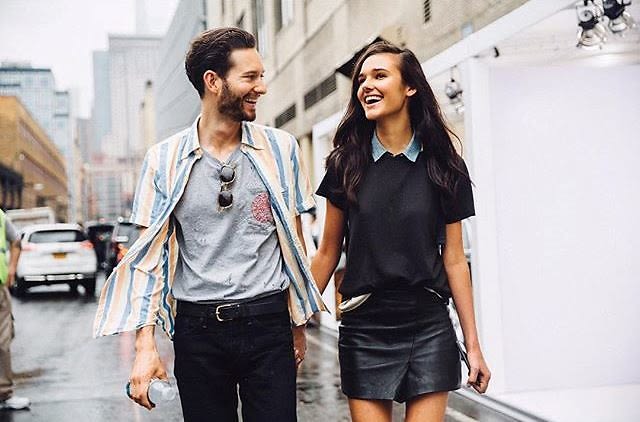 There is no shortage of DJs in NYC, but surprisingly enough we manage to discover new ones who quickly make a name for themselves during major events. Isaac Hindin Miller didn't have to worry too much about that— we already knew him from his style blog IsaacLikes.com and his relationship column on Manrepeller, and even the occasional DJ set with nightlife guys like Steven Rojas. But this year he teamed up with his model girlfriend Jenny Albright to officially DJ under the name Isaac Likes Jenny, and they found themselves spinning major fashion events like the Business of Fashion 500 party and the unofficial Yeezy Season 2 after-party as well as a weekly gig at the exclusive Never Never. We had to catch up with them to talk music but the loose conversation quickly turned into dating stories and advice which reinforced Miller as the go-to guy for all things relationships. Read on to get the scoop on how to approach people at one of Isaac Likes Jenny's killer parties, the most common relationship pitfalls, and of course, the one song to turn any party around.

[Photos via Kat in NYC, The Sartorialist, @isaaclikes_, @jennyalbright, all courtesy of Isaac Hindin-Miller & Jenny Albright]