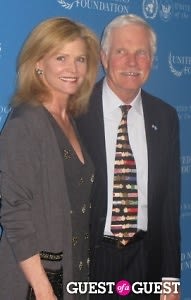 Ted Turner is a powerful man. It is not advisable for anyone to enter into a party parley with the media mogul. Deutsche Bank's Christopher Burnham defied that admonishment last night.

The mustachioed Turner was at The Waldorf Astoria for the Annual Global Leadership Dinner celebrating the alliance of the United Nations Foundation and the U.N. Association of the  U.S.A. He wore a flag-spangled tie. Turner was in high spirits and spent much of the cocktail portion of the evening with lady friend Catherine Crier on his arm as he posed for photos with dignitaries and philanthropists.

As the bulbs flashed, Turner mustered up his nicest Savannah drawl for the photographers.

John Kerry and Teresa Heinz Kerry entered, and the Senator from Massachusetts told me he had met with Obama that morning in the White House to discuss his New START. As the Kerrys posed with Crier and Turner, the media mogul said,

"The U.N. recognized me for this award 12 years ago, but it cost me a billion dollars."

He laughed a hearty laugh. 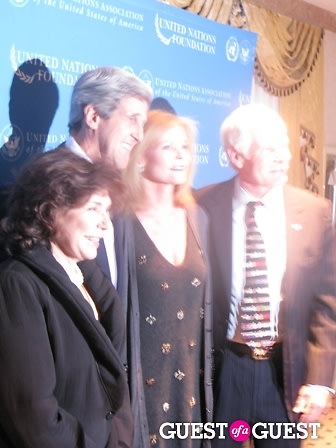 As most moved into the main party area and away from the step-and-repeat,  Burnham, a Deutsche Bank private equity big wig who used to be Under-Secretary-General of the U.N. for Management, busted Turner's chops about his land ownership. 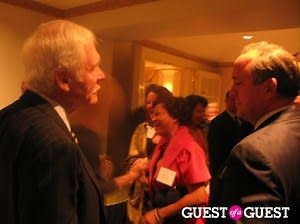 Turner, America's largest private landowner, has about two million acres of land--more than the combined land areas of Delaware and Rhode Island. Burnham took issue with Turner's reintroduction of wolves on his properties. I stood behind Turner and listened to the squabble.

"I'll call it worth it," Turner said mid-conversation. "How can you have an...I've got habitats without any wolves.  Listen, but I don't want you to be really upset about..."

"Yes," Burnham said. "I'm upset that you're doing something that's affecting the ecosystems as we know it."

Turner did not back down from his belief that an absence of wolves would be detrimental to the environment; he sees the predation as essential to keeping animal populations in check.

"We took it out," Turner said of the wolf. "That's where we made the mistake. We took it out of the system, that's...that was a major mistake."

"How many wolves were on your property..." Burnham began.

"I wasn't there," Turner said. "Neither was anybody else."

There was some chatter in which Turner tried to take a historical perspective on the land, but as I was standing behind him the exact sense of it all was lost. 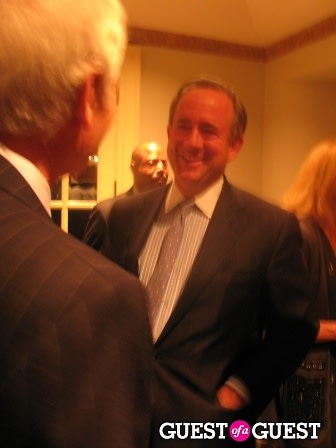 "I've heard you have the largest buffalo herd in America," Burnham said. "I also heard that you alone have brought the buffalo back into mid-America."

"You know how many buffalo I have?" Turner asked.

"You know how many I stared with?"

Turner held up three fingers on his right hand.

They talked about bison and cattle populations and got chummy.

Turner alluded to his restaurant chain Ted's Montana Grill, and the two separated with tempers evening out a bit. I decided to follow Burnham to his next conversation to see what he made of the mini altercation. 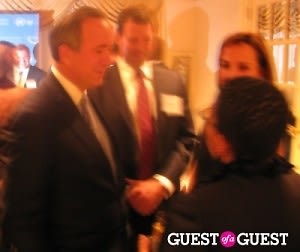 Burnham was mingling in a circle of four--two women and his friend from Deutsche Bank. A woman told him that she was a doctor, and when he asked which kind, she said, "pediatrician."

He responded that he wished she was an internist and intimated he had a question about something around his right rib. The other woman in the group said that she couldn't help him unless he was "carrying a child in there," indicating his paunch.  Burnham said he hadn't had the hormone treatment, and everyone riled in laughter.

I sidled up to Burnham and asked him what he made of the kerfuffle.

"Ted has reintroduced the wolf population back into the West which has decimated the elk and deer populations," Burnham said. "Ted says that's nature. I say this has to be better regulated, has to be brought back into balance."

And with that I left the party and took the elevator down only to encounter Martha Stewart, with whom I would take an epic elevator ride.