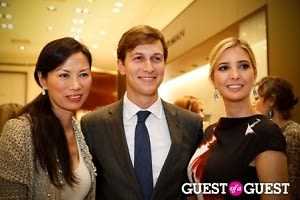 After we caught up with Ivanka Trump at the Saks Fifth Avenue cocktail reception for the debut of her fine jewelry line--and had her dish about her Gossip Girl cameo--we moseyed over to Wendi Murdoch to talk about her friendship with Ivanka and Rupert Murdoch's taste in jewelry.

Though Rupert has been known for his association with Jared Kushner, groomed as something of a protégé to the Australian media tycoon, Wendi explained that she and Ivanka got close because of the proximity of their apartments.

"We were neighbors on 502 Park Avenue, the Trump building," she said. "We lived in the building before we moved to our new building. So we rented there for two, three years."

This residency at Trump Park Avenue came during Rupert's bid for The Wall Street Journal, when his conquest was still in embryonic form. Rupert is known for his lavish New York domiciles, having sold his co-op loft at 141 Prince Street to fashion designer Elle Tahari for $24,675,000 in 2005 coupled with his purchase of a 20-room triplex at 834 Fifth Avenue for $44,000,000 from the estate of Laurance S. Rockefeller.

But Wendi lamented in particular her family's move from the Trump building which separated her from her beloved neighbor.

"[Ivanka] got married, and we moved to a new building," she said. "My children love that old building, so I come by and visit some."

Never doubt the nostalgia evoked from the Trump brand. Wendi, though, eases the pain of her two daughters, 5 and 9 years old, by buying them baubles.

"I buy jewelry for them. I buy it first and then give to them."

Wendi does have some pieces from Ivanka's collection:

"I have some earrings from her, and necklace, and rings. I love her jewelry. I also love to support her. She's a good friend."

But because she was arriving from a different event, Wendi didn't wear any Trump numbers. Instead, she sported a pair of shimmering earrings.

"[Rupert] bought me these," she said. "Harry Winston earrings. He bought these like 10 years ago."

Wendi began to philosophize on her aesthetic preferences in bijoux:

But the evening's agenda had been set, and Ivanka needed Wendi to continue on to the next venue of revelry.

Ivanka joked to me, as she and Wendi strolled out of Saks.