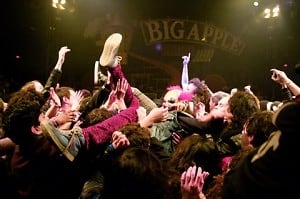 The Jersey Shore's Vinny flexes his designer muscle with a T-shirt line, Lang Lang hangs out with adorable school children, and clowns riot during a punk rock show at Lincoln Center. Last night's parties were lowbrow, highbrow, and out of hand.

Where: Damrosch Park at Lincoln Center

Who Was There: Japanther, The Pharmacy, The So SO Glos, Voxhaul Broadcast, Electric Tickle Machine, Rage-filled aggressors

Other Details: More than 1,000 people packed into the tent that normally houses the Big Apple Circus. While the first bands went on without a hitch, Japanther only made it through three songs of their set before a riot broke out and organizers were forced to close the show. "Oh, my God, it was crazy. I was off my feet for a whole minute. I thought I was going to die in there," a teenager told the NY Post. "That's what i'm talkin about. Carnage. Total carnage. Up the punks!" -guy smoking inside @japanther show/riot/fail, lincolncenter" said a Tweeter. The event was scheduled for two days, with different bands on the roster for tonight. Whether they'll cancel remains to be seen. [Via] 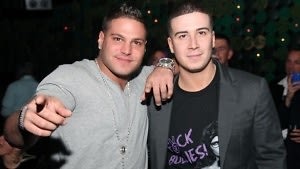 Other Details: The Jersey Shore's Vinny has jumped on the product extensions bandwagon with a clothing line called IHAV, for I Have A Vision.  Not just for guidos, the T-shirts promote a message that goes beyond GLT and fist pumping.   The words, "Fuck Bullies," is emblazoned on the front next to an image of a scantily clad woman. Not the best image to go with it, and one that, as pointed out by Jezebel, could make the text seem like a directive, but Vinny's heart was in the right place. The profits go to DoSomething,org. [Via]

Who Was There: Lang Lang, VH1 Save The Music Foundation Executive Director Paul Cothran, school kids

Other Details: Lang Lang and three of his Lang Lang International Music Foundation Young Scholars put on a performance for 350 students to celebrate music education in public schools. VH1 Save the Music Foundation donated a keyboard lab to restore this school’s music program back in 2004. Since then, the school has grown its music curriculum to include a band and orchestra program. Awe. [Via]