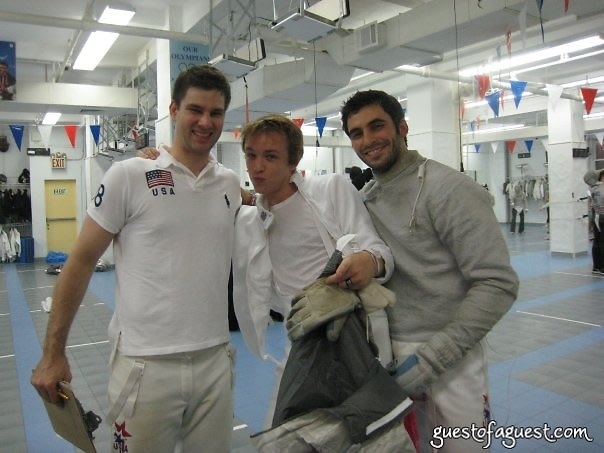 Last Friday, Liam McMullan, Ari Cohen (our newest GofG member), and I headed to the Manhattan Fencing Center for my very first Fencing lesson from the best our country has to offer. It was quite the experience. Tim and Jason, the newest hot socials taking our city by storm are going to be inspiring the children at Boystown on Wednesday and are hosting a New Year's Party called "Open '09 With Olympians!". Tickets are already starting to sell go HERE to purchase your own! Here's what Tim had to say about Friday's event:

On Friday, Jason and I hosted our second “Night of Fencing with Olympians” at our club the Manhattan Fencing Center. In attendance was Ben Bailey (host of the highly successful “Cash Cab” on Discovery), Liam McMullan (the newest young-man-about-town who is set to take over Lydia Hearst’s Page 6 gossip column at the NY Post), and Nicole Sawyer (producer of the Fox Business Show “Happy Hour”). Also joining us were our old friends from Teach For America and several members of the NYC media including GuestofGuest.com founder Rachelle Hruska and writer Ari Cohen.

Jason and I are confident that fencing can be the next big thing in New York City, and the only thing preventing that from happening is its limited exposure. So upon pondering this dilemma, we figured that there is no better way to educate folks then to get them out there on the fencing strip to see for themselves! We had an amazing group of coaches to train the 20-some odd folks that attended. Our phenomenal staff included NCAA champion Daria Schneider, NCAA All-American Paul Reyfman, Olympic-team member Dagmara Wozniak, National team members Ben Igoe and Matt Zich as well as our teammate, Olympic Silver Medalist James Williams. We spent about 45 minutes going over the basics and then, in and effort to provide as much individualized instruction as possible, broke up the group into teams to practice the finer points of fencing before the high point of the night, the team event relay match.

Guests teamed up in groups of four and took each other on for the ultimate prize: the world’s smallest fencing medal (hey, it was all we could find!) and all the bragging rights that come along with being the best beginner team on 39th street in Manhattan. Gone were anyone’s reservations about looking silly as the competition began, and the newly minted fencers dueled it out with gusto!

By the time the competition ended and everyone was sufficiently “pooped”, guests began to make their way home. For the brave souls that still have a bit more energy to burn off, Suzy Wong’s in Chelsea served as a excellent venue for the after-party. Even by the end of the night, people still had fencing on their lips. I laughed to myself just before I left as one of our guests uttered the famous last words: “Man, I am going to be sore tomorrow!”