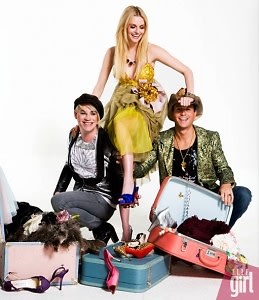 On today's cover of the New York Post, we were immediately drawn to the headline:"Lyin' Lydia Won't Come Clean." This was their response to this email that Lydia Hearst wrote to them, resigning her position as guest freelance writer for Page Six Magazine, which we posted exclusively yesterday.  We weren't entirely shocked to see this dramatic headline; this is, after all, The Post, but we were curious to get to the truth.  It appears that, not only did The Post print a quote that was blatantly and severely edited, they are claiming that Lydia didn't even WRITE her posts for them.  According to the Post:

"She was interviewed by a reporter, who put her thoughts into cohesive paragraphs."

Making her look both illegitimate and dumb.

"With a world fixated on society and scandal on the West Coast, why not turn the tables and focus on this metropolis we call New York. I wasn't born here. Yet every day I'm faced with the dreaded stereotype of the New York society socialite. A harsh reminder of my apparent separation from what most would consider normal. Everyone has a dark side and eventually is forced to come face-to-face with their inner demons. But what happens behind closed doors, should stay there. Things happen, things you never see coming, and sometimes you have to wonder, if you knew what to expect, would you want to make any changes? Far too much time and print has been wasted scrutinizing celebrities and the like. Scandal isn't what always sells, it is just generally what you are given. Maybe mistakes are what help to make us who we are? But it shouldn't be that which defines us.

There is a far different side to this city; every day is not 73 degrees and sunny, there are no beaches or accessory pets and thankfully no-one drives drunk. Manhattan is a city centered on style and sophistication. The place where krispy kreme was invented and anything and everything you could ever desire from Q-Tips to Cipriani's can be delivered right to your door. I'm not your typical New Yorker. I didn't even grow up here and I care more about actual charity work than the events which are created merely for socialites to gain recognition and a photo op. And, brace yourselves, I'm a die hard, Red Sox fan, though I must admit I have not truly followed the game since Johnny Damon became a Yankee. My work clothes consist of Fendi, Philip Lim, Marc Bouwer, Cavalli or any other designers with stylish mini dresses or high-waisted pants from their new and vintage collections, all smartly paired with matching platform heels from Christian Louboutin and chic Louiv Vuitton handbags and Lia Sophia or Chanel accessories (how's that for free advertising/shameless endorsement).

I don't work in an office or even have a desk, but on average I put in eighteen hour days between photo shoots, appearances, my writing and the gym. In a place like New York a person's style is a job unto itself. New York is unpredictable and ever changing, but that's part of the fun! I was thrilled when I was accepted into the world of bright lights, high-fashion and discovered by Meisel back in 2004. It is a daily battle to make it to the "top" with socialites and celebrities running-a-muck all over the world trying to surpass the other with style and class. The fashion weeks may be long since finished though the competition remains relentless. To survive the nightly events you have to mingle, smile, remember names of photographers, designers and magazine editors, know all the new fashion trends and do it all in five inch platforms with perfect hair.

Maybe it's difficult to grow spiritually when religion and the bible are replaced by Vogue, and you worship at Chapel Savoir-Faire. The thing the people don't realize is that it is a system. You don't have to conform. It is about breaking the mold and reaching inside yourself to discover not what you are and what you are doing but who you could be and all you could accomplish. In Manhattan there are endless ways to fill your day; museums, buffets, movie theaters, the Central Park Zoo and night clubs galore. Every day millions of people come to New York and walk the streets to see the sites and just maybe get a glimpse into the mystery and excitement that makes this city truly worth of the name 'Big Apple.' This is a city that thrives on change. That is the magic and allure that draws people here. Sometimes, a girl like myself just needs a new beginning. I have learned his first-hand that the entertainment industry is a fickle one and it is the press that controls the opinion and voice of the people, once something is printed it allegedly becomes true and can alter the outcome of the industries' and an individuals' future. BY: Lydia Hearst (That's me if anyone has their doubts)"

*There are around 3 facebook profiles for Lydia Hearst.  This one was taken from the only one in which the heiress personally manages.

Will Lydia come out on top and be stronger than ever after this Post scandal is laid to rest?