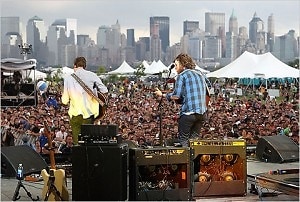 New York's latest failed attempt at a large-scale music festival won't be happening this weekend. After two years of mid-August revelry, All Points West is AWOL. But that doesn't mean you can't make your own mini-festival, starting tonight. One of the reasons NYC has trouble hosting an annual festival like APW is that, unlike in Indio or Manchester, the craving for good music can be sated every day of the year. The next five nights are no exception, with a host of shows featuring past APW performers as well as newer acts who'd have likely made the bill this year.

And while these concerts are scattered around the city, at least they won't require a trip to Liberty State Park on Jersey City light rail: 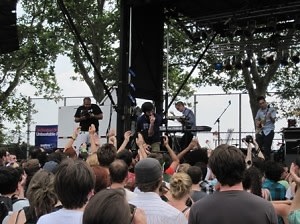 MGMT at Radio City Music Hall, 8pm: One of the biggest Brooklyn/"indie" success stories of 2008--remember the near riot at their Pool Party gig with the Ting Tings?--MGMT drew a big crowd at APW last year, despite rain and a vocally disastrous performance. The boys from Wesleyan did not escape the dreaded sophomore slump with the release of "Congratulations" earlier this year. But they landed a Radio City gig, fickle internet hype machine be damned.

Titus Andronicus at Glasslands, 8:30pm: A standout at this summer's Northside Festival,Titus Andronicus, above right, has been making waves with its Jersey-centric punk-tinged Civil War concept album "The Monitor." Check out their kinetic live show in the cozy Glasslands before they make the inevitable jump to larger venues, like Webster Hall next month.

Devendra Banhart at Terminal 5, 9pm: "Freak folk" darling Banhart's lo-fi sound isn't one you normally associate with the cavernous Terminal 5. Which if nothing else could make for some less obnoxious crowds at the venue.

Two bands with intriguing names stand out on a night of relatively paltry offerings. Abe Vigoda comes from the same LA noise rock scene as No Age, and will presumably explode in popularity if and when their namesake Hollywood icon ever bites the bullet. They play Cake Shop at 8pm. Just across the East River from Cake Shop, Das Racist brings its party-rap to Glasslands.

If your taste runs toward the mellower side of the musical spectrum, '90s relic Babyface hits up B.B. Kings at 8pm. Hopefully he's aged well. 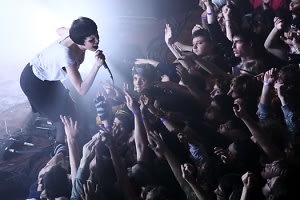 Crystal Castles at Terminal 5, 9pm. The band indie purists and dance musics fan love to hate, beep-meisters Crystal Castles' eponymous sophomore album nonetheless won critical praise. The last time I saw the duo, lead singer Alice Glass, left, was (or pretended to be) so wasted she had to be carried offstage 30 minutes into the set. We'll see if she fares better at T-5.

As for recreating the APW vibe, what would a festival be without a long in the tooth reunion act and oddball celebrity musician? Tears for Fears hits up The Wellmont Theatre (bonus for APW nostaligists: the venue is in Jersey!) while Juliette Lewis graces the Music Hall of Williamsburg with her kooky presence.

Chromeo at East River State Park, 2pm: What a long, strange trip it's been for the Jelly Pool Parties this summer. This could be the concert series' final bow. If so, it should get a fitting sendoff from Chromeo, who'll no doubt get the crowd moving. To where, who knows.