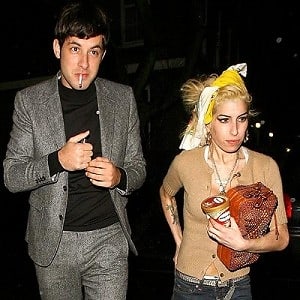 At 35, is Mark Ronson coming into his own? New York asks that question this week in reference to Ronson's new album, Record Collection. Critics have weighed in on whether the release will define the...collectivist producer as an individual or prove his gift is "passing off his friends' talents as his own."

Socially, Ronson is known as a cool cat, the embodiment of polished grit (think Beatrice Inn in its prime). Musically, he's best known as the producer behind an array of British musicians who range from quirky (Robbie Williams) to endearingly odd (Lily Allen) to get-this-girl-a-straightjacket-and-toss-her-in-a-white-padded-room insane (Amy Winehouse). And tabloid readers would know him best as brother of Lohan ex Samantha.

How does the man fare as a distinctive musician toiling away in the studio? The mixed, but tilting toward solid, critical reception of Record Collection (which came out September 28th) leads me to believe he has a shot. Some snippets:

"Record Collection is more than just an homage to style: The writing is diverse and thoughtful, and the contributors are used in such a way that they’re allowed to show off without showing up the songs," Marc Hawthorne, Onion A.V. Club.

"DJ/songwriter/producer Mark Ronson's 2010 album Record Collection feels more like the work of an actual band, or at least a collective, and less like a DJ album of guest vocalists...The ultimate irony and triumph of Record Collection, is that on an album all about how Ronson's own obsessive music tastes have defined his life, we finally hear him step away from the turntable and produce one of the best albums of his career," Matt Collar, All Music.

"And so paranoia produces, if not a great album, a respectable transition from love-him-or-hate-him brass-toting berk into a genuine, bonafide pop maverick," Pete Cashmore, NME.

On the other hand:

"The problem with having so many different voices writing and performing is that Record Collection sounds like just that – a lot of different things plonked on a shelf that have their time and place but sound distractingly disparate when grouped together," Will Dean, BBC.

"Evidently it's his source material that defines him, and this time it's disappointingly weak," Dan Genoe, Dot Music.

Looks like the angry Pitchfork mobs will have to settle this debate. Ronson has his work cut out for him on that front: Pitchfork gave his last album, Version, a lowly 3.3 out of 10.