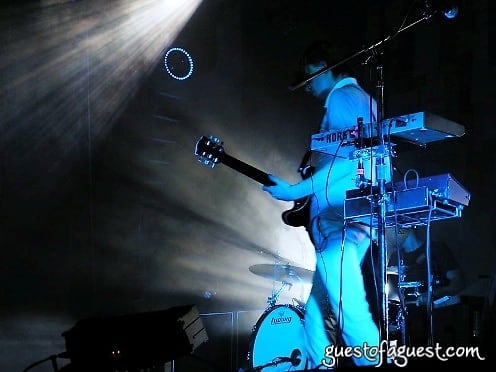 Go HERE for more photos from this event by Kristen Piece

Death Cab for Cutie touring their new album Narrow Stairs, played a live show at McCarren Park Pool on June 10th with Rogue Wave opening. The sold out show was filled with songs from some of their numerous albums from the last 10 years of Death Cab's career. Many of their new songs like I Will Possess Your Heart had the crowd at full attention (throughout all 8 minutes of it), with a driving bass line beckoning the piano's response to the rhythym section and then to the sweet but seductive lyric. Ben Gibbard's tenor voice has a very relaxing quality to it that makes you melt into the lyrics, many having a whispery quality, like a lover telling secrets in your ear.

All the songs seem deeply personal but can speak to many people's hearts. The musical quality of the show was apparent throughout until the show was stopped by an impending thunderstorm that blew through cutting the show off at 9:30. The other members of the current band are Chris Walla , Nicholas Harmer , Jason McGerr and they gave a stellar performance with showmanship and musical grace.