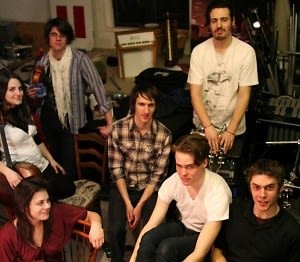 Chosen by The L Magazine as one of New York’s “8 Best Bands of the Year”, Motel Motel opened Music Hall of Williamsburg’s New Music Fest, hosted by The L, with their high powered “schwag rock”—a combination of alt-country grit, heavy metal drums, and a slack style built upon Eric Engel (guitar, vocals), Timo Sullivan (bass), Mickey Theis (guitar), and Jeremy Duvall (drums)’s distinctly American background—one that finds a Virginian, a Hawaiin, a Neil Cassidy kid from Denver, and an Albany boy all in NYC making music as variegated as their homelands. Here, the band takes turns finishing one another’s sentences in a quest to define schwag rock, and, in turn contributes their two-cents to how the Digital Age is affecting genre, music, and “the scene."

How did your name come about? Do you have a story about that? Mickey: I’ll tell the real real story right now. So my friend in worked a hotel in Denver, like a really nice hotel. It’s called Hotel Palomino or something like that and he was always like, well, he was down on the idea of like a fancy name following the word ‘hotel’. Like it was too prestigious. He always said why not just call it ‘Hotel Hotel’? And so he was like, ‘If you’re ever in an indie rock band, which I know you will be,’ and this is like in high school, ‘you should name your band Hotel Hotel’. And I wanted to do that, but then I found out there was another band called Hotel Hotel so it was like, well Motel Motel sounds better anyway, and it’s trashier, so it’s more of our asthetic.

Yeah. Let’s talk about the ‘schwag’ thing. Because I read somewhere that you encapsulate the feeling of schwag without it being a hippie thing. Timo: It was an old term? Schwag’s an old term? I always thought schwag was shitty weed.

Mickey: I think we kind of ride the um, I don’t know. We’re not like ‘on it’, you know. Like I practice this but I don’t really practice. Like we’re all ‘on it’ but we’re not quite on it. Like a band that was really like like really really off they’d be called shake rock because it’s just like, shake. But like schwag you know, you’re at least trying…

Timo: Decent pot! Like you can’t afford real shit, but…

It’s interesting. I hear a lot of country but I also hear just straight rock. It seems like when your songs break down into those country moments that’s where the shwag elemenzt originates. Do you think Denver inspired that in the composition of the songs? Jeremy: I think Eric is the schwag.

Timo: I grew up in Hawaii and country music is the devil over there, like no one likes country music AT ALL and I came over here to school and I hated country music, but then I met these kids and they loved it and they taught me it’s awesome. What happens is everyone brings a different taste to the table. Which is like, “country taste” and Jimmy is like a metal drummer. So it’s like that fight between country and the other influences. Like my influences are clashing with their influences. We all love different music and it’s that clash that makes that wave.

How does your songwriting process work? Eric: Our newer album, I think, kind of went along with the aspects that we’re talking about. I think one of us, I would come with some kind of formula, and they’d kind of find a way to turn it around. So usually I would come with a traditional music and they would do everything to pull it in every musical direction to the point where we’d have to find that balance where it holds all the elements.

Mickey: Yeah and I also think it’s important to say we recorded [the album] on our own and it took us a whole year. I feel like that’s worth talking about because

Timo: It’s not one single thought.

Mickey: It’s a bunch of different ideas coming together from

If you guys could take a look at your music and equate it to the general landscape of politics and our nation, what general message do you think you’re sending? Eric: It’s a hard question. It is a hard question.

Jeremy: I’m going to speak for Eric, because Eric writes all of lyrics to the songs and really I feel like most messages that come across in songs are from the words themselves and I think at all costs we’ve avoided any political strife with any one group. We have our own political beliefs I just think, you know, there’s so many other things to worry about in the world. Music is fun. And our music is a lot of fun. And I think if we brought politics into it, or what we feel about this country, like, what they’re doing in Washington it’s going to lose it’s fun.

I mean the youth that is listening to your music and how it will make them view the world? Timo: The last great explosion of the scene, I think, is Seattle, and that was the 90’s, almost twenty years ago. And I think that’s because of the internet, of these scenes coming together.

Mickey: It’s a fusion of all scenes, so there is no scene.

Timo: I mean the fact that we can claim two homes, I mean Denver and New York I think speaks to that ability of like being able to cover multiple boundaries and not be defined from where you are, like, ‘I’m from Seattle I play grunge,’ or, ‘I’m in Nebraska I play country.’ Here in New York it’s a culmination of that, but it’s no longer just New York’s culmination. I think the whole world is culminating with these genres crossing, and it’s awesome.

Mickey: It’s really good, it’s also weird when you think of something like hippies or punk rock. The hippie movement was all like, ‘drop out’, and I feel like a lot of the bands then had a lot of political things to say, but think of The Grateful Dead, like they didn’t associate themselves at all with that. I feel like with us, it is. Because art for art sake is a really, sometimes I feel like a self absorbed thing, but with this band, I feel like it’s just music. It’s music and it’s kind of like painters who just paint for the paint. It’s music for music. And shit is fucked up in our world, but sometimes people just want to feel good.