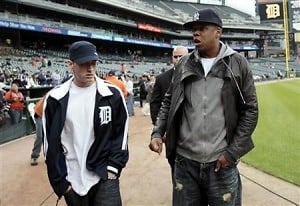 Eminem opened last night's Video Music Awards in style, then promptly fled the ensuing train wreck. The resurgent rapper had an excuse to hightail it out of Los Angeles: the first of two shows with Jay-Z, the man who made a Yankees cap more famous than a Yankee can, at Yankee Stadium tonight.

Jay-Z and Eminem's double bill marks the first concert at the 2-year old stadium, and will likely be attended by 100,000+ fans. That's quite a bit more than the lucky few who attended the duo's June show on David Letterman's roof. They'll presumably make up for diminished sightlines by playing more than three songs. And if last week's shows at Comerica Park in Detroit are any indication, expect cameos from the likes of 50 Cent and Dr. Dre. All this, for floor tickets that can be yours for as little as $11,782!

The previous Yankee Stadium saw its share of blockbuster concerts. In a bold affront to his Lawn Guyland roots and allegiance to Shea Stadium (which was recently documented in Last Play at Shea), Billy Joel headlined the House that Ruth Built in 1990. U2 and Pink Floyd also rocked the field. In its young life, the Bronx Bombers' new home has hosted some more staid extrabaseball events, including NYU commencements MCd by Hilary Clinton and Alec Baldwin, and a prayer service led by babyfaced televangelist Joel Osteen.

While the rappers don't have a prayer of surpassing the Beatles' earth-shaking 1964 gig at Shea as the most iconic concert to ever take place in a New York sports venue (or, really, in New York), you can count on a memorable evening almost as much as an "Empire State of Mind" rendition as performance centerpiece. Let's just hope Detroit's top pop culture export doesn't let his (third place) Tigers loyalty deter him from giving his best in the home of the (first place) Yankees.