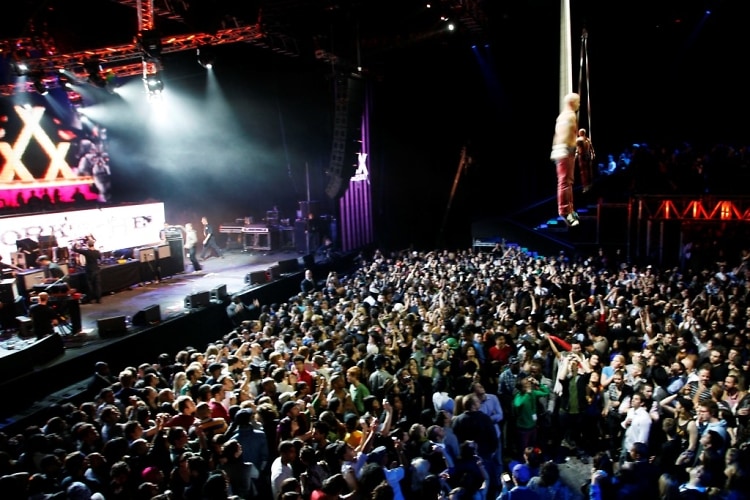 MC'ed by a raving tranny in a tent that resembled an adult circus, the scene was incredible. Check this, Marty Markowitz, the Mayor of Brooklyn, opened the event after an astounding marching band set the mood on stage.

As Chris Brady remembers it, Mayor Markowitz introduced the Turkish ambassador as "my man." That's what I call keeping it real and no doubt Brooklyn knows how to do it properly.

Rather than roadies changing the gear on stage in between sets, imagine six girls hanging from the ceiling by their legs on ropes, performing stunts reminiscent of your childhood visits to Cirque de Soleil - by the way, which should happen at every show, according to Mr. Brady and Austin Conroy. So should bottomless Don Julio, who was the sponsor, the boys added. All contributed to an excitement level that only could be described as giddy, as the crowd cheered and jeered while waiting for the acts to begin. 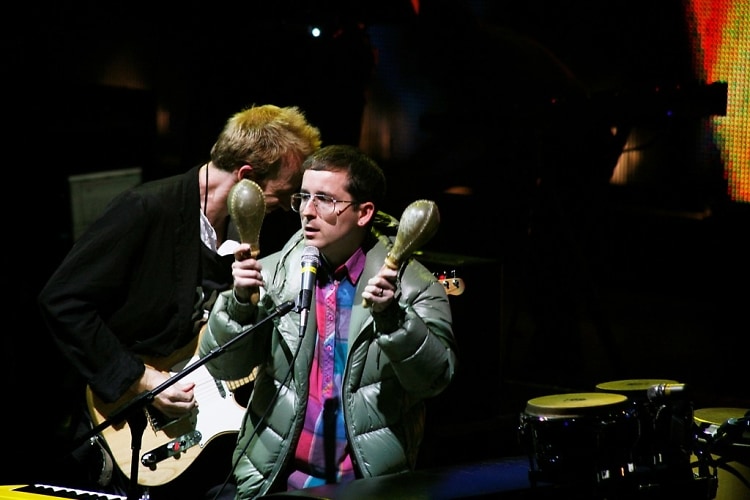 BUT, none of this could compare to the actual music. The festivities began with Hot Chip, which true music lovers wouldn't even want to categorize. In such an over-saturated music world, it's rare to find a beat that makes the crowd wile beyond their own comprehension. Hot Chip is unique in all the best meanings of the word. Mr. Brady and Mr. Conroy recall,

"Dancing to those electronic sounds like dirty funk and looking up to see a singer who looks like Bill Gates in a puffy jacket poking one finger on a keyboard sending shockwaves through the crowd, you know you've found something special- and not that simple kind of special..."

If Hot Chip wasn't enough, why not throw in some Chaka Khan? Regardless of sex, age, race, or political affiliation, the gathering ranging from hipsters to gangsters began screaming "I'm Every Woman". Now, you know you are officially experiencing Chaka Khan, and joined by Hot Chip no less! Hot Chip (with her bassist in tow) impressively held down the disco sound with their own edge, leaving Mr. Brady with nothing else but raising his arms in the air screaming,

"I'm buying nothing but Diesel for the rest of my life!"

And, you can't forget M.I.A., who just makes you smile. She rocked out hardcore and yes, she's preggers! Talk about hardcore electric. For the finale, N.E.R.D. took to their classic style. At this point, the gaggle of fans could only dance in their self-induced blackouts. When bringing a group of artists together that quite possibly will never be in the same stage again, you got to give it up to the producers for taking the risks that make an event a once in a lifetime feeling. 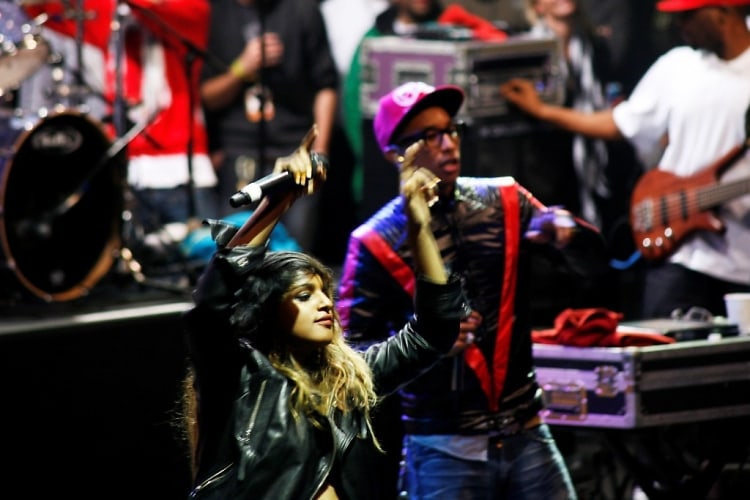 All in all, not a single complaint. We even saw a British girl converted to American patriotism through the magic of funnel cake. True story. Inspired by midgets sitting above the bar dressed as surly-looking carnies, several guests couldn't help but break into a spontaneous USA chant. Diesel. Way to live out the strangest corners of the American Fantasy. Ideally, do it hammered in Brooklyn, and in some surreal, absurd and nondescript way, you'll feel, if only for a moment, like you're better than everyone else in the world. Then, take a step back to reality feeling genuinely fantastic, and (in a perfect world, while walking back over Brooklyn bridge on a stunning Saturday fall night) remember why you love this god damned City. 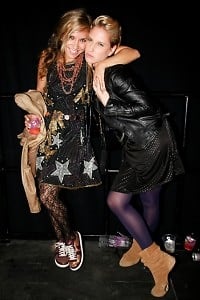 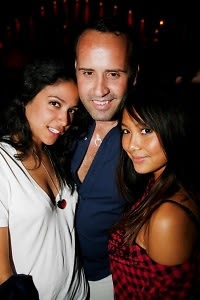