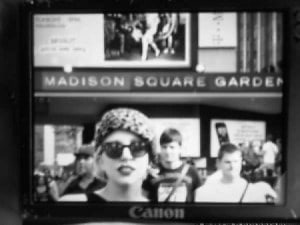 Lady Gaga has her last of three sold-out concerts at Madison Square Garden on Friday night, but not before a self-promoting singers rite of passage - performing on The Today Show tomorrow morning. The 7am concert has people already lining up at Rockefeller Plaza for the short (but free) set from the diva, even in these crazy heat-wave conditions!

Gaga at the Garden is a dream long held by the ambitious performer, who was born and raised in NYC. Despite her self-proclaimed struggles of performing in Lower East Side dives, it really has been nothing short of a meteoric rise for the singer, who only earlier this year was playing at Radio City Music Hall. Now she is headlining three-sold out concerts at Madison Square Garden, with hordes of Gaga-ites ready to emulate her next crazy outfit.

Without New York - I would not exist! 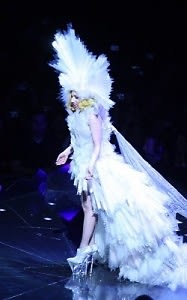 Whipping the crowd into a frenzy of city-brotherhood love, the tour does in fact feature numerous nods to her hometown, including a tattered subway car, Central Park tree stumps and a rundown urban landscape. If that wasn't enough of a wink and nod to her upbringing, the Lady got nostalgic with the crowd:

“My name is Lady Gaga and I used to sit right over there, way far in the back and way up top. And I saw Madonna and Cher and the Rolling Stones,” Gaga said. “I used to think, someday, I’m gonna be up there under those bright lights.”

And just like a young Judy Garland, yes you are honey. Under those bright lights, singing hits such as "Just Dance", "Paparazzi", "Telephone" and "Alejandro", finally leading the crowd in an encore of rah rah ah ah ah's with uber-hit and (gay dance extraordinaire) "Bad Romance".

For those Gaga-ites attending tomorrow and looking to dress up like the diva herself, at least you know no-pants will be especially effective in the sauna like conditions at The Garden! 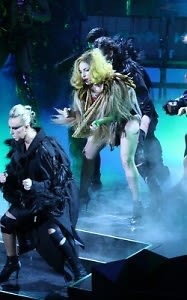 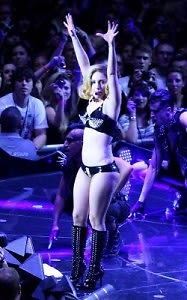 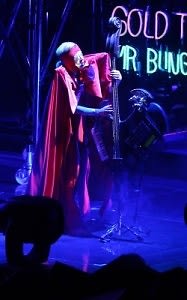