LCD Soundsystem and The National are two Brooklyn bands. They're extremely popular with Brooklyn (and Manhattan) hipsters, as well as less annoying people. They both released new albums this month within a week of each other. They're both all the rage. But which claims ultimate indie bragging rights? 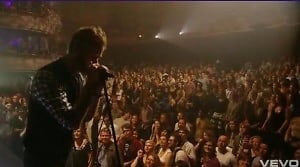 Despite playing to a smaller number of people and LCD's stint of sold out shows at a major venue (this always looks impressive), The National takes this round for the diversity of its venues, in terms of capacity and setting, and the feat of making it to and selling out an illustrious joint like Radio City.

The National made the late night talk show rounds on Craig Ferguson (+) and Jimmy Fallon (-). LCD went straight for the bright lights of Hollywood. Frontman James Murphy scored Greenberg, a Ben Stiller indie movie (+) from Noah Baumbach, a Brooklyn-bred indie director (++). But his contribution was subtle to the point of sounding nothing like his studio and live work (--). End result: LCD, by Stiller's nose *

The New Yorker's resident hipster and music geek Sasha Frere-Jones wrote a flattering LCD feature in the magazine's May 10th issue. Nicholas Dawidoff penned a brainy (and flattering!) National piece for the Times magazine last month. It's a tough call. And James Murphy gets props for breaking into the literary, oft-stuffy New Yorker confines. But the Sunday Times is still (for now) the Sunday Times, so this round goes to The National. (Victory includes bonus points for Dawidoff's revelation that The National endured extensive time in Bridgeport recording its latest, "High Violet").

The good: "High Violet" debuted at #3 on the Billboard charts. The bad: it debuted at #3 during the weakest week for album sales since Soundscan began its rankings in 1991. The ugly: Justin Bieber topped the chart. That said, results for LCD's "This Is Happening" won't be out until Wednesday. And it's unlikely that the record industry will reverse a decade-long meltdown in the interim, so sales will likely come with the same sad little asterisk. Right now, sales preeminence is TBD. 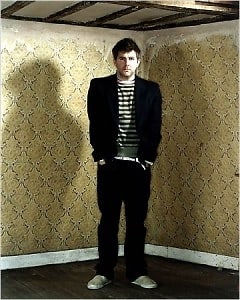 2010 Brooklyn Vegan mentions: 21 for LCD Soundsystem, 41 for The National

"This Is Happening" scored a 9.2 on Pitchfork's finely calibrated (and supposedly punishing) ratings scale. Anything above a 9 on Pitchfork approaches Arcade Fire territory and is rumored to send the L train off the tracks as it approaches Bedford. Pitchfork gave "High Violet" a very respectable 8.7. But that will get only the drunkest of hipster boys to switch teams (as if they ever limited themselves to one) for lead singer Matt Berninger.

Ultimately, a 9+ Pitchfork score trumps all in the bewildering wilds of the indie music blogosphere, so LCD comes out on top here.

As of today, The National has a small lead over LCD Soundsystem. But even though "High Violet" was released just seven days before "This Is Happening," it translated into a significant head start in terms of press coverage and area tour dates. LCD's latest has only been out three days (despite a much-publicized torrent leak) but has already inspired another torrent of deafening blog buzz, much of it praise, some of it vituperative (but most internet chatter is).

Look for the race to continue as sales comparisons can be made and the sweaty summer touring season heats up.

*Based solely on the television performances or film contributions I heard about.

**No one knows if a satirical HRO mention is the best or worst thing to happen to a band as it premieres a new album.