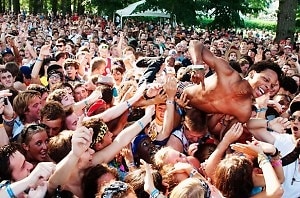 At Lollapalooza this past weekend, neither rain, nor heat, nor thunder, nor mud could keep the fans from enjoying the massive festival to its fullest.  The 20th anniversary of the fest brought in over 270,000 people and well over 100 bands. The three day whirlwind of music was everything a music festival should be. An extremely diverse crowd migrated to Chi Town to hear their favorite bands, from Coldplay to Noah and the Whale to Eminem.

The entire festival sold out completely, so there was a small army of beer-fueled music fans congregating at Grant Park. One of the most impressive parts of Lolla was the community atmosphere of the fans. Considering the circumstances, there was an amazingly small amount of conflicts, and aside from people shoving to the front for their favorite shows, everyone was there just to "chill" and meet new people. The younger generation mingled with people their parents age who sported Lolla tees from '91 and '92, and for the most part, people were considerate and laid back.

On Friday,  the festival began at noon, and artists such as The Vaccines, The Naked and Famous, Foster the People, and Skrillex filled the afternoon, and in the evening Coldplay, Ratatat, Girl Talk, and Muse rocked the festival's main stages.  Saturday featured artists like Friendly Fires, Local Natives, Ellie Goulding, the Deftones, and Atmosphere.

Saturday night, more than 200,000 people migrated to the South end of the park to watch Eminem perform, while My Morning Jacket fans headed to the North end, and techno fans congregated at Perry's to watch Pretty Lights. Sunday had an incredible line-up, Iration, The Cars, Cage the Elephant, Kid Cudi, and Deadmau5 were some of the most popular shows. 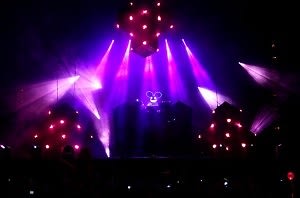 In 2010, Lolla fans dressed up for Lady Gaga. This year, one of the most memorable acts was Deadmau5 on Sunday night.  Fans sported giant mouse heads for the massive concert. Deadmau5 boasted their spot as the only electronic act to occupy one of Lolla's main stages. Joel Zimmerman shook the Bud Light stage with bass so deep the ground moved (or maybe that was thunder?)  and an ultra-intense light show from his booth on stage as the sky dumped rain and fans gave it everything they had at the final concert of the three days. [via]

There was something for everyone, including those that were feeling nostalgic about Woodstock, the festival that started it all. On Sunday evening, there were two, sudden, monsoon-like rainstorms, and the only thing that wasn't dampened was the spirit of the concert-goers. Mud-apalooza had begun.  Personally, I headed down to the Sony Stage to join the boozy frat boys in mud sliding down a hill into a pyramid of industrial sized trash cans.

Perry's, the techno mecca of the festival, essentially became a muddy lake, and the heavy bass pounded right on.   The entirety of Grant Park became a soggy mud fight, and the attendees kept right on rockin for the Foo Fighters and Deadmau5. Many attendees agree that was an ideal, if messy, way to end the festival. Sadly, it's time to put some aloe on the sunburns, wash off the mud, and return to the real world... at least until next year.

Coldplay-With over 150,000 people in attendance, Coldplay put on a spectacular show. Spectacular special effects and three encores made it one to remember. 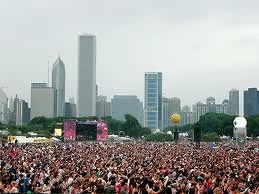 Foster the People-Most famous for their song "Pumped up Kicks", Foster the People's first ever Lolla performance knocked it out of the park. Lead singer Mark Foster had incredible energy and stage presence, and told his enthusiastic fans that was the best day of his life.

Local Natives-A fairly eclectic band, Local Natives produces songs you can dance to almost as well as you can swoon to them. They gave an energetic and on-pointe performance to the south end of the park, which was almost completely full of their fans.

Noah and the Whale-Decidedly my favorite band that I didn't already know, Noah and the Whale performed from their new, more upbeat album. A fan described it as "How the Velvet Underground would sound if Lou was a bit happier."

The Cars- Who doesn't love a blast from the past? A prime example of the 80's at their peak, and one of the only bands from that era performing, The Cars drew a huge crowd of all ages, and gave a good show.

Be sure to check out the fashion: ['Best 2K I Ever Spent" The Good, The Bad, & The Bizarre Lollapalooza Fashion]