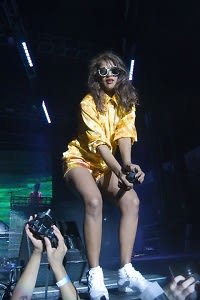 After a widely panned performance at Hard NYC last weekend, M.I.A. tweeted plans for a free rain date for attendees who held on to their waterlogged ticket stubs. But will a free show salvage a rough year or add to the singer's woes?

Free events in New York often support the cliché of getting what you pay for. Free concerts sometimes end in riots. And in summer, gratis outdoor shows seem more likely than not to bring on torrential rain. M.I.A. learned this the hard way on Saturday when a thunderstorm interrupted her set. The next day, a Jelly Pool Party scuttled from the open air East River State Park to Brooklyn Bowl as the clouds opened on.a bill featuring No Age, Cap'n Jazz and, fittingly, Lightning Bolt.

M.I.A. acknowledged being at the mercy of Mother Nature in the tweet that tipped out the free gig:

"fuck it! im gonna do a free show in nyc when i get back, tho i dont have powers over rain!"

But her issues with the rain ignore the bigger problem: it wasn't inclement weather that soiled her Hard gig, but what was by most accounts a lackluster performance. And even if you pin the weak set on technical glitches, M.I.A. still found herself upstaged by the rising stars (Die Antwoord, Sleigh Bells, Rye Rye) she'd handpicked and championed as festival "curator." The bride became the bridesmaid, and the wedding day rain fell only on her.

Fans will appreciate the gesture even if M.I.A. comes to regret it. But if she wants to hang onto them, her takeaway from Hard should be that bolstering other musicians' images ought to take a backseat to rehabilitating her own.