A "New Face" for the King of Pop 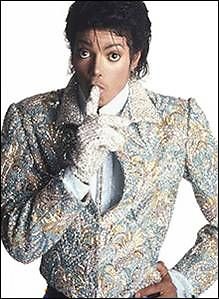 So my friend is taking the class "The History Theory and Practice of Public Relations" at NYU. This of course means she gets to partake in "creative arts" projects with other adults. Though taking night classes after a full day's work can certainly be challenging, the paybacks are often pretty rewarding. Their first assignment was a "Dynamic Duo Case Report" in which they must clinically examine a contemporary public relations case (picked randomly from out of a hat) and using concepts and practices discussed in class organize a 10-minute presentation. This includes listing out the primary challenges and an action course for the case. Her case study = Michael Jackson.

My friend soon learned what we all know too well: Michael Jackson is a most difficult PR case. He has had a lot of "different faces" but it seems at present, he needs a "new face" in the public spotlight. Skimming through her power point presentation left me grinning. I mean what a guy. He's provided us with so many years of things to talk about. Of course there are his musical milestones including 13 #1 hit singles, 13 Grammys, over 750 million musical units sold, the best selling album of all time, the Guinness Book of World Record's most successful entertainer of all time and the crowned "King of Pop".  There are also the social "milestones", including child molestation accusations, financial troubles, and more importantly strange behaviors. Craig Marks, editor of music magazine Blender explains it best: "The media is no longer dwelling on Jackson's music. It is almost impossible to hear his records and not conjure that scary weird guy." Changing the tainted public opinion of MJ would be the most challenging part of his PR case, here are her steps to get MJ a "Brand New Face":

1.) Trying to make the public forget about the charges brought against him.

2.) Portraying Michael as a "normal person" who is ready to make his way back into the spotlight.

Summary of her tips to do this:

-Sell Never Land (no one said this would be easy Michael)

-Use the money to get out of financial debt as well as donate childish possessions to various charities (Like his Richie-Rich-styled Rollar Coaster!)

-Aside from donating various possessions from NL ranch, DO NOT donate to children's charities. Any way to deter the public from being reminded of MJ's previous alleged relations with youth is advisable.

-Slowly be brought back into the public eye. Get caught doing "NORMAL" activities and in a controlled fashion (get conservative stylist and get shot for US Weekly's "Stars, They're Just Like Us" feature).

-Start heavy collaboration with new artists instead of the already-done greatest hits CD. Pick artists who's own careers have been heavily influenced by MJ's work (Kanye, Justin, Usher, etc.) (I personally would love to see MJ and Timberlake have a dance off on a music video)!

-Do not go on tour but rather surprise fans on stage at the concerts of his collaborating artists for a fresh start.

-Fulfill his contract with the Prince of Bahrain and in the future only sign contracts he knows he can and will commit to and follow.

Though it will be hard, I think with a new PR team headed by my lovely friend, and a positive attitude, MJ CAN MAKE A COMEBACK!! He would need a lot of support and alot of work (both physically, mentally, and spiritually), but if people are so eager for Britney's big comeback, I think we at least need to give the King a chance. Otherwise, this may be his progression: 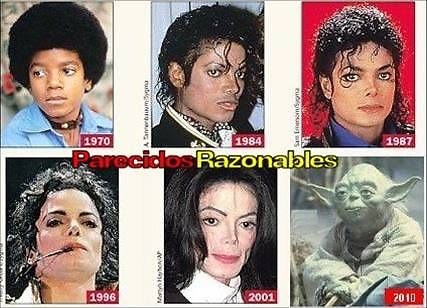 I must also admit, however, that although this presentation seems thorough and convincing, trying to assess and reinvent the PR situation surrounding MJ with any amount of certainty is simply impossible.  Its not black and white.  There is a massive gray (if not coffee colored) area that ultimately clouds any kind of exact conclusion on what steps to take.  For example, assimilating MJ back into "normal" society sounds good, but is it really possible?  Will he be authentic, and will the public accept him?  Is the abnormal baggage not inextricably tied to the man, the myth, and the legend surrounding MJ? I hope that we all get the chance to find out, I'm getting bored with the "difficult PR girls" (Lohan, BritBrit, Nicole).