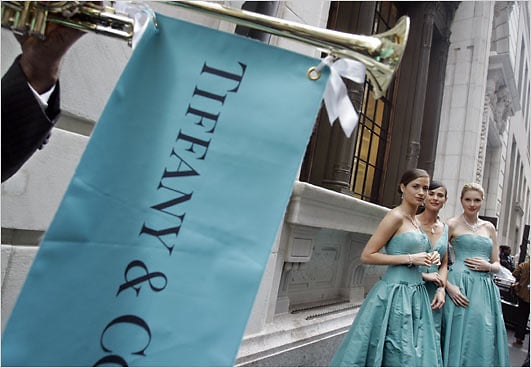 Who doesn't love watching VH1's "Best Week Ever" every now and then on a slow Sunday afternoon?  We haven't seen the show in quite some time, but are proposing that this week they give their "Who's having the best week ever?" award out to the song "Moon River".  Besides being the opening of this week's Gossip Girl, the song had major face time at the opening of the Tiffany's store on Wallstreet.  Apparently musicians were playing the song on street corners around the store all day long.  Racked did quite the job reporting on the  event, with several pictures of the crowds and interior shots of the glamourous store that is helping to bring luxury retailers like Hermès, Thomas Pink and BMW to the financial district.  They are moving down there of course, to help to service the influx of rich residents that area is seeing (includy Amy Sacco).  More on that in later posts.  The Times reports that the Tiffany & Co.’s banner was hung inside the stock exchange, as traders received shopping bags with branded water and blue-and-white cookies.  Well, we know one thing, thousands of young be-boppers will be downloading Moon River on their ipods after this week.  Johnny Mercer and Henry Mancini, who were the composers of the famed tune, are surely smiling in their graves.