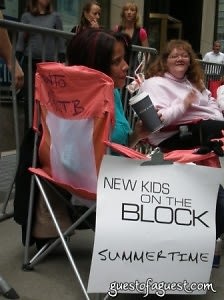 We have to be honest. We were PSYCHED when we found out that New Kids on the Block was having a reunion tour. This was partly because we welcomed an evening of sixth grade nostalgia (craftily-acquired beers, Donnie frenzy, side ponytails, etc.) and partly because we’re always game for a random reunion and/or train wreck. We could NOT WAIT to get our hot little hands on some tickets. Or maybe we could.

Apparently, we greatly underestimated the appeal of a NKOTB reunion tour. What made us realize the magnitude of our hubris? It was when we almost tripped over NKOTB votaries camping on 48th Street as we were en route to a lunch date at Saks. It is understood that NKOTB were quite the rage back in the day, but … camping out? For NKOTB tickets? Almost twenty years later? We don’t like to judge, but let’s just say that if Jimi Hendrix were resurrected for a 2008 tour, we would consider camping out. And we LOVE Jimi Hendrix.

Regardless, we were shocked and dismayed at the sight of it, our dreams of a NKOTB-filled night of debauchery fading as we walked the line of lawn chairs, inflatable rafts and suitcases. Lucky for all of us, that line only spanned one-half of an avenue. Whew! For a second we thought it would just be us and our closest friends watching the HBO special. And as a side note, it is posts like this one that make a person thankful – oh, so very thankful – for a pseudonym.