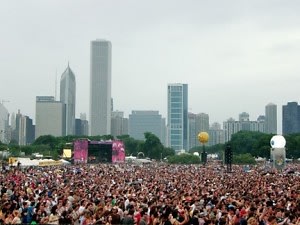 Lollapalooza descends on Chicago's Grant Park August 6th. The former grunge showpiece has widened its scope: Lady Gaga will headline. But indie purists shouldn't complain about the festival going mainstream. Instead, they can flatter themselves by ignoring the top of the bill altogether.

A festival flier is like a music snob's eye chart. Any dolt with mediocre Top 40 tastes can recognize the acts at the the top of the bill. The challenge comes in winding your way from the large font boldface names that dominate the first row of the lineup down to the microscopic groups clustered along the bottom without missing a dissonant, obscure beat.

This year Soundgarden, Green Day and Gaga comprise Lollapalooza's first string. The first two, though stale, recall the festival's early years as the grunge and alternative genres' itinerant screecher. Lolla began as a tour in 1991, with Jane's Addiction, Nine Inch Nails, Butthole Surfers and, in an early nod to cross-programming, Ice-T on the bill. (Soundgarden headlined in 1992.)

But Gaga's inclusion might concern traditionalists. Reunion tours and long-in-the-tooth bands are one thing. Festivals cost, and can't survive on Hipster Runoff readers alone. But the world's biggest pop star? It's a sellout, even if it helps Lollapalooza sell out tickets and ensure future installments. 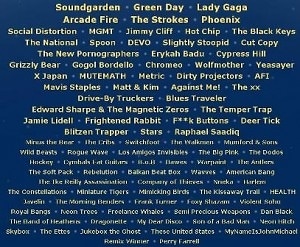 To be fair, Lollapalooza outgrew its alternative routes a long time ago. It went on a five-year hiatus after 1997, was canceled in 2004 and returned in 2005 as a single-weekend festival as opposed to traveling circus.

And it hasn't gone totally Z100 (the New York station switched from an alternative to Top 40 format in the mid-'90s): Arcade Fire, The Strokes, Phoenix, MGMT, Grizzly Bear, Yeasayer, The Black Keys,The National and other quasi-indie bands are scattered among the lineup, rows 2-6.

With firmly established acts stealing the spotlight from fledgling bands who need it, the 2010 flier seems to turn Lolla's original mission on its head. But at least that can inflate a music connoisseur's ego.

As a rock fan who is terribly insecure about the sophistication of my tastes, I can take comfort in knowing The Antler's latest album inside and out. They're all the way down on Row 14! And I caught Wavves (Row 15) at dinky old Mercury Lounge, like, a year and a half ago.

Unfortunately these small, self-flattering victories are short-lived. A striving music snob's credibility can rise and fall as quickly as the fortunes of musicians themselves. Just ask Perry Farrell, who co-headlined the festival last year with his band Jane's Addiction. This year, he's the very last name listed on the bill, as a solo artist.