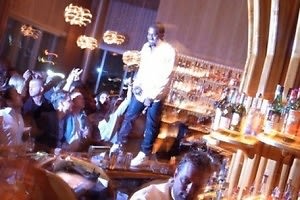 UPDATE: Kanye is playing Bowery! Announced at some point today, tickets are already sold out. People are selling them on Craigslist from $500 up to over $1000.  Worth it?

Kanye West has a penchant for holding unannounced shows around New York especially when he is promoting a new album. While he tends to prefer more upscale venues like Boom Boom Room or the Box, there's some trustworthy Twitter buzz he may be playing tonight at Bowery Ballroom.

Just got to rehersals for my performance with mr Ye West tomorrow at the Bowery Ballroom 2morr. Dark Fantasy Baby!!!

Bowery's web site has no information, but Scottish band Idlewild canceled their scheduled show so there is an opening.