In spite of searing heat and unexpected transportation dilemmas, hordes of fans came out to Manhattan's Governors Island for indie darlings She & Him's July 4 performance.

The duo (Zooey Deschanel and M. Ward) and accompanying band were outfitted in red, white and blue as they performed over 20 songs for a crowd of hot but happy music fans, who traveled by water taxi to the free concert.

Although attendees were no doubt grateful for the show's free ticket cost, transportation to the venue proved a hassle: Governor's Island is, in fact, an island (surprise), and the droves of concertgoers caused a clog at the Manhattan departure point (Battery Maritime Park), upping travel time from the usual four minutes to more than twenty. (For future reference, the water taxi also leaves from Brooklyn).

Tickets to the concert were distributed on a first-come, first-served basis and sold out quickly -- concertgoers started lining up for the 4 p.m.  performance just after noon, and those who arrived without concert wristbands after the venue filled were turned away (perhaps wishing they had purchased advance tickets to the duo's Tuesday concert at Terminal 5, also sold out).

She & Him's performance was part of the Converse-presented "Gone to Governor's" series, which has already brought indie hits Yeasayer, Passion Pit and Portugal. The Man to Manhattan's southernmost isle this year. "Gone to Governor's" is known for putting on high-profile indie concerts free of charge: Along with Sunday's She & Him concert, upcoming shows from Caribou and Phantogram (7/16), Lucero (7/10), Josh Ritter & the Royal City Band (8/8), Neon Indian (8/14) and Dr. Dog (8/15) will also be free.

For more information and to reserve tickets for upcoming (not free) concerts, visit The Beach at Governor's Island web site. 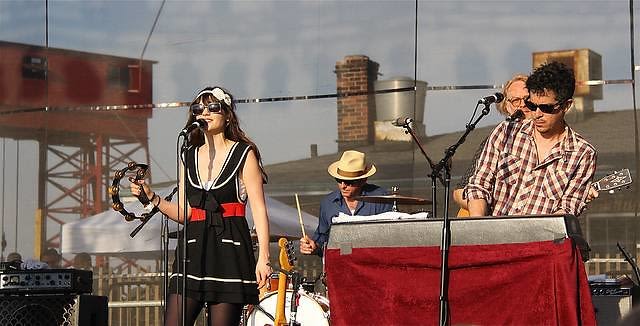