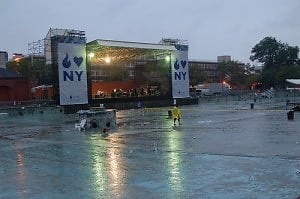 Arcade Fire's not the only big act in town tonight. Hot Chip, with openers Hercules And Love Affair and Holy Ghost, play Central Park Summerstage at 6:30. Unless they don't, thanks to forecasted thunderstorms. In which case, the concert would join a long list of doomed outdoor shows this cruel, cruel summer.  Consider the recent, soggy history:

Drake at South Street Seaport: No, Drake's curse had nothing to do with sharing a bill with Hanson. Although it might have contributed to the civil unrest that marred the rapper's Paper show on June 15th.

Ke$ha, not at South Street Seaport: In the sweetest summer lemonade ever made out of lemons, Ke$ha's free Pier 17 gig was cancelled in the wake of Drakegate.

The Antlers and Dinosaur Feathers at Pier 54: No major disasters beset this free indie rock show on the Hudson. But a blown generator disrupted the proceedings during Dinosaur Feathers' opening set. The boys valiantly concluded their show after the surprise 45-minute hiatus.

Jelly Pool Party: After suffering some technological setbacks with a hacked Twitter account, Jelly's July 25th Pool Party with Cap'n Jazz, Lightning Bolt, and No Age had to relocate from East River State Park to the indoor Brooklyn Bowl due to a thunderstorm. Chaos and round-the-block lines ensued. Then someone stole Jelly's computers.

Hard NYC: Things were going swimmingly for this M.I.A.-organized mini-festival on Governors Island. That is until the sky opened on the beleaguered curator and Sri Lankan freedom fighter. Which, given the quality of her performance before the downpour, might not have been a bad thing.