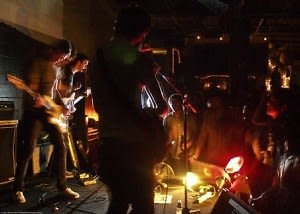 You don't go to the DIY-ish Glasslands expecting creature comforts, though the sole window AC unit was an appreciated, if comically ineffective, gesture. Still, Titus lead singer Patrick Stickles and crew seemed unfazed as they ripped into their set shortly before midnight.

Titus Andronicus' latest album, "The Monitor," is named for a Civil War ship that was "neither fast nor strongly armoured." The same can't be said for the group's sound, which is punk in spirit even as it goes beyond the genre's three-chord primitivisim in songs long enough to constitute an entire Sex Pistols album. ("The Monitor" closes with "The Battle of Hampton Roads," a 14-minute long ditty that would take up nearly half of "Never Mind the Bullocks.")

Titus Andronicus invites the inevitable Springsteen comparisons that every band from Jersey--Glen Rock, in this instance--endures, with references that pay homage to and undercut The Boss. "Tramps like us, baby we were born to die," Stickles wails in "A More Perfect Union." Lyrics detail dead end suburban angst, but they're set to music that lets you work out your aggression. Think Arcade Fire with a sense of humor. Or Bruce on amphetamines. 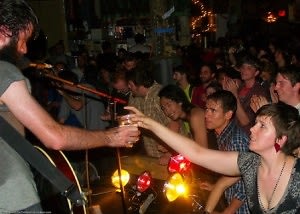 At Glasslands Stickles told the crowd they'd be hearing a lot of older material from Titus' debut, "The Airing of Grievances." The band is gearing up for a big fall tour, and wanted to play lesser-known material to a smaller crowd presumably better-versed in their catalog while they could. The gig started with a harmonica intro to "Titus Andronicus" ("This is Springsteen-ish," said my friend) and included some slower songs, perhaps in concession to the heat.

But no matter how well fans knew Titus' obscure songs, their energy peaked during "A More Perfect Union." The mosh pit--the first I've joined since 1998--lasted for the tune's seven minutes, with a brief interruption and demonstration of pit hospitality as one man searched the floor desperately for a lost contact lens.

Before the show a NAG spokeswoman acknowledged the jaded crowd--"I know a lot of you are rolling your eyes at me"--before describing the group's work. Knowing her audience, she cited NAG's victory in rescuing the East River State Park from becoming a dumping ground, which made the Jelly Pool Parties possible (yes, some might joke that the two are one in the same). It was a bittersweet note, since hours earlier the the Pool Parties had been given the slip. But she added that Glasslands was another cultural gem in need of protection against development.

It's safe to say that after the rousing concert, the audience agreed.