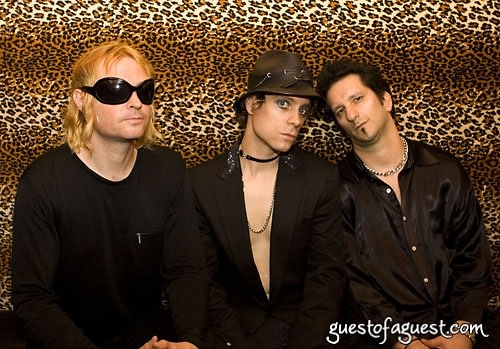 What do you get when you mix a bit of surf rock with a GOTH vibe that's not so scary or dark, if that's possible? You get Tulips for Tina. Though Tina has only been a band proper for about four months, they've just released a C.D. That's where we got caught up them at their C.D. release party/video shoot at 'the home of glam', Lucky Cheng's basement.

With a theatrical vibe and a bunch of inclinations toward fun, bassist Jackie Duncan wore Rollerskates through out their whole performance tand the band had the entire crowd dancing and singing along. The band's charismatic lead singer Mars, told me after the show that the band's name came from a Turkish folk tale of a man who had lost his wife, and in his grief had died in the desert only to have tulips grew where he had fallen to show his undying love for her. Tulips for Tina's C.D. are available on a limited basis at their show and on their myspage page.