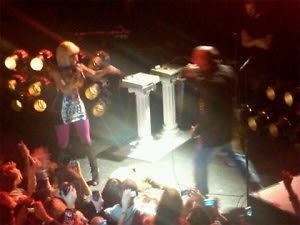 Kanye West forgot he was supposed to be playing music for about 10 minutes last night when he went on a rant about Taylor Swift not defending him (ugh), George Bush's "Racist" comment (ugh), and the debacle on the Today Show (ugh). Basically, he read his Twitter stream out loud.

Whine. The overarching point: Kanye is a victim.  This is certainly nothing new.  For the most part he rehashes statements he has made before, mostly about the media and with excessive capitalization on a certain social network, with one exception that is rather surprising. By way of defending himself, he also defends George Bush.

I wouldn't expect to see him playing the RNC though.

There's something to be said about keeping things bottled up inside, aside from not annoying and alienating fans. With the amount of rage he spewed, Kanye could have written another whole album. The crowd can be heard cheering throughout the video, but they were probably just excited they made it inside. Ticket holders reportedly waited in line for three hours with of course, the exception of Diddy who just strolled on in.