David Fincher's The Social Network opens the New York Film Festival tonight. Facebook's rocky creation story begins with founder Mark Zuckerberg as an awkward Harvard undergrad and posits that he started the site mainly to impress Harvard's suave final club crowd. Veracity of the plot point aside, does the movie get the clubs right?

In the opening scene, Zuckerberg (Jessie Eisenberg) haughtily corrects his Boston University girlfriend after she makes the common (even among Harvard students and more than a few final club members) mistake of calling final clubs finals clubs. The name comes from the eight all-male upperclassmen clubs historically being the final social destination along the route of societies (e.g. the Hasty Pudding) pledged by lowly freshmen, and not from the hives of intellectual activity they become leading up to exams.

While final clubs admissions data is not mined as thoroughly as the College's for the purpose of diversity claims in glossy brochures, the Phoenix is, as Zuckerberg points out, widely considered the most diverse club on campus. Screenwriter Aaron Sorkin kindly left unanswered a character's question about the easiest club to get into.

As shown in the movie, women are occasionally bussed in to the final clubs from campuses elsewhere (cough, Wellesley) on what is politely dubbed the Fuck Truck.

Clubs do alert aspiring members (or "punches") to their progression through the four stage punch process (which generally consists of a cocktail party at the club, an outing to the Cape or a country estate, a date event and a final dinner) by slipping fancy invites in fancy (wax-sealed!) envelopes under dormitory doors. 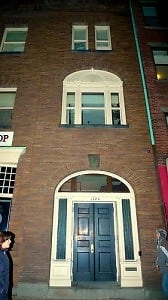 An early montage of final club debauchery includes lithe, semi-naked co-eds popping ecstasy and gyrating on antique furniture. While drugs are fairly common in (some of) the clubs, they're relegated to nooks and crannies that are mostly off-limits to non-members and their partners in crime. And sadly for the undergraduate community, the only nudity most students ever see at a final club involves gone to flesh returning alumni in a losing game of strip flip cup, or shriveled initiates doing naked runs around the backyard in the Cambridge February air.

The closest Zuckerberg ever comes to a final club is when (our very own) Cameron and Tyler Winklevoss (both played by Armie Hammer) invite him into the Porcellian's "bike room" to propose a Harvard social network.  While the bike room is the only area of the Porc clubhouse, right, open to non-members, it is still strictly limited to members' lady friends and punches.

Fincher and Sorkin's undertone of Zuckerberg's Jewish middle class outsider longing rings false in the 2003-4 Harvard setting. Certain final clubs remain closer to the traditional image of WASP establishment tree houses than others. Frankly, Jewish students probably wouldn't care to join them. In fact, the biggest problem with Fincher and Sorkin's psychological profile of Zuckerberg regarding the final clubs is that the only students who really want to belong to the clubs are the ones clubs would want as members.