NYC: It's a Beauty - It's a Bitch! a column by John Norwood 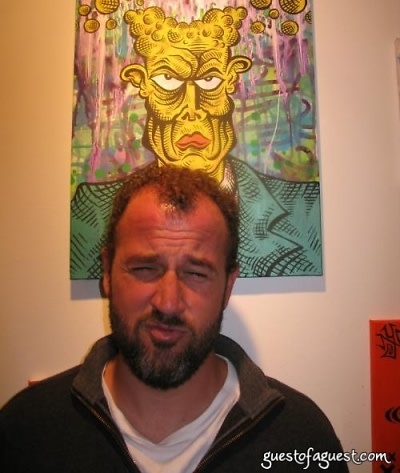 Go HERE for the entire gallery from this event by John Norwood.

Night is my time for walking. I love to look for that glow of light that beckons from my intended destination; a movie premiere, a new restaurant, a new nightclub, an art gallery opening. As I approached the appropriately named Half Gallery, for painter Damon Johnson's new show titled, "Thanks for Asking", I noticed that only a slight glow could possibly escape from this tiny LES storefront. Also, apropos, their logo was done all in caps with the bottom halves of all the letters removed.

Never mind the size of the gallery, I had big expectations. Three clever people own the place; James Frey, the best selling author. Bill Powers, the former editor of Blackbook Magazine and Andy Spade, husband of handbag empress, Kate Spade. Plus, Damon is the son of the New York Post's Page Six editor, Richard Johnson.

Damon's style evolved out of a childhood fascination with, "... action figures, cartoons and comic books. Comic books were, by far, my biggest influence." And, he did lots of "outdoor art", as graffitti artists like to call it. Ever been arrested? "I have been served my share of bologna sandwiches!"

According to Bill Powers, Damon's work is, "Scared skulls, rehab portraits, lost characters from a Palalniuk novel; he marries his biography with the cultural paranoia of a generation."

When I first went into the gallery, I was a bit disappointed. It seemed under attended. But, in true LES and hipster style, most were late. And, things developed much better than I expected.

My plan was to photograph people close up, next to the paintings with my subjects imitating the expressions of the characters in the paintings. Seemed like a cool idea, but it was much more difficult than one would think. Most people wouldn't do it, they were afraid. Much concern about looking stupid. Even Richard Johnson wouldn't do it:

"Gawker will get the photo. They will cut out Damon's painting and run my weird expression for the next ten years."

Well, I did shoot some people imitating the paintings, but that's not even the best part. Michael Ovitz showed up - the former god of Hollywood power. Other than a few who already knew him, no one else seemed to recognize him except me. I tried to get him to pose, but he wouldn't do it.

He wouldn't even stand in front of a painting with a normal expression, "I'm flying low." I tried to talk him into it, but he wouldn't budge, "You can take my photo if you must, there's nothing I can do to stop you!" I wasn't about to. Later on, I tried again. I explained that these were harmless circumstances.

I even mentioned that his former talent agency, Artists Management Group, had represented me as an animator, (my alternate life). He seemed to loosen up, but he still wouldn't budge. Little did I know that he was planning a sneak attack on me. A while later, he walked up to me and grabbed my camera out of

my hands, "I'll show YOU how to take a snapshot!" He herded James Frey, Amanda Dolan, and me together, then snapped us. Funny and charming! And, it's actually a good shot. Now, this column might have the only shot ever taken for a column that has a Michael Ovitz photo credit. That little incident inspired me. I got Richard Johnson to take my photo too. So, we now have a photo with a Richard Johnson photo credit as well.

Another celeb was clothing and accessories designer, Cynthia Rowley. She told me, "I feel like a kid. When I was a kid, I always had skinned knees. I have a skinned knee!" So, I got down on the floor and shot her scab.

And, while I was down there, I shot her own beautiful black and white shoes. Also, while I was down there, Cynthia was approached by up and coming artist Amanda Dolan, who was also wearing some amazing black and white shoes (Patricia Fields). Amanda looked down at their feet, "Oh no! I've got competition!". Cynthia replied, "No way. You win!" Smart of Cynthia not to fight. Amanda's heels on her very high-heeled shoes are made out of brass knuckles.

The highest praise comes from other artists. Amanda Dolan, who just had two of her paintings scooped up by the Rock N' Roll Hall of Fame for an exhibit they are doing at the Museum of The Gulf in Texas, said of Damon's work, "His colors are electric and vibrant. The new urban street chic." Another artist of note, Andrei Petrov, who has just been commissioned to do three paintings for the new lobby of The Four Seasons Hotel in D.C. said, "They are not Norman Rockwell, they're not going to warm your heart. They're frantic cartoon portraits that kind of mix Gahan Wilson, R. Crumb and S. Clay Wilson with a dash of Basquiat."

My very own sister Chris Norwood, a 2005 Nobel Peace Prize nominee, was also a willing subject. I asked her why she picked a particular portrait to pose with, "Because he looks like you!"

On my way out, James Frey told me why he and his partners got together, "Our job is not to make money. Our job is to show work that is under appreciated, that deserves to be shown, hopefully avante garde.

Damon's work is sophisticated, cartoon street art. It represents his collective life experience. He's a great young painter. We kept the gallery open an extra hour for him!"

I had a pleasant walk to my next destination - thanks for asking! 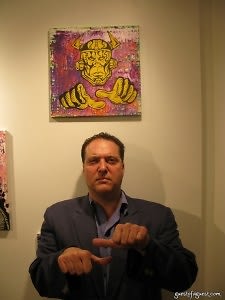 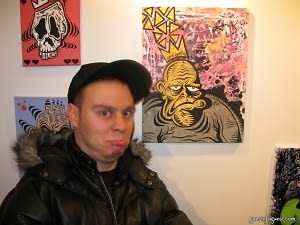 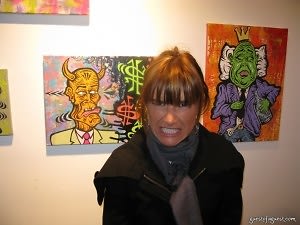 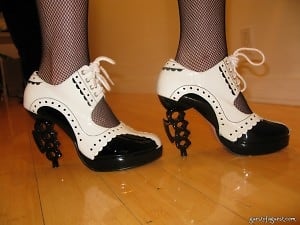 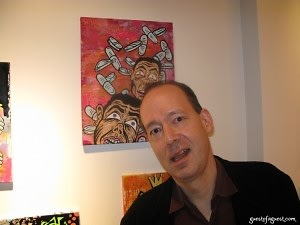