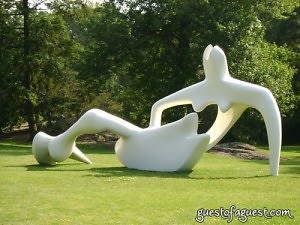 Forgive me for the terrible pun, but I couldn't help but sing the Britney Spears song as I walked through the Moore in America exhibition in the New York Botanical Garden yesterday. Though it was incredibly hot and humid yesterday, the breathtaking views of the sculptures of the late Henry Moore in earthly, natural surroundings made the sweat dripping down my face completely worth it.

Moore believed his sculptures belonged in an outdoor setting, that the interplay between that which is artificial and man-made against the backdrop of the untamed beauty of nature was more meaningful than his work being placed in the most famous of buildings, and what better place to exhibit his work than the New York Botanical Garden, which encompasses nearly 250 acres of land, a beautiful green spot, a little piece of heaven amidst this city of bland, gray skyscrapers. With about 20 major works featured through the expanse of the garden, this is the largest outdoor exhibition of Moore's sculptures in the United States. Though Moore's work is created through the welding of metals, mainly cast bronze and marble, the soft fluidity of his forms deeply contradicts the harshness of such materials. Contradictions may also be found in the simplicity of his forms as compared with the lush, natural surroundings. The sculptures like his titles are reduced to the bare minimum, an eyes a nose, breasts, just enough to distinguish the figure depicted, the details are superfluous for of course we have our imaginations. Furthermore, the figures in their flowing abstraction echoes the vitality of the sculptures' surroundings. Unlike a museum, these works adapt with the shifts in the day, one sculpture may have a completely different appearance and overall feeling depending on the intensity of the light and the depth of the shadow. There is an unknown element that Moore's sculptures in real, live nature presents, which makes each viewing unique.