At the moment, the Museum of Modern Art has commissioned five architects to erect their own prefab dwellings in a vacant lot on West 53rd Street, right next to the museum. Last night, they held a cocktail hour and had many guests from all different walks of life arrived to view the exhibit, including photographer  Chance Yeh and designers from all over the world. Other attendees were the young faces of the Upper East Side, as well as the downtown artsy crew.

Actress Rachel Heller was there and said she loves art and has been to almost every exhibit at the MoMA in the past year. 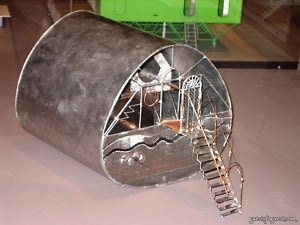 From over 400 nominees, the five architects participating in "Fabrication of the Modern Dwelling,” are KieranTimberlake, Lawrence Sass, Douglas Gauthier, Jeremy Edmiston, Oskar Leo Kaufmann, Albert Rüf, and Richard Horden. The proposals were evaluated by a jury of MoMA curators and staff members and architectural specialists. The Manhattan architecture firm of Cooper Robertson & Partners will act as the consulting architect in assembling the houses, some created expressly for this exhibition and others designed earlier.