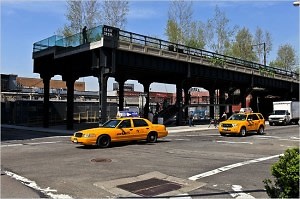 Big news from stuffy old Museum Mile: the Whitney finally finalized a massive expansion centered around a new building in the Meatpacking District. The project won't be completed until 2015. But it's not too early to ponder the ramifications it will have on the amorphous neighborhood.

Board members unanimously approved the plan yesterday after some 25 years of fitful debate. Whitney chairman emeritus, very rich man and, props, exceedingly generous arts patron Leonard Lauder supported the move after years of opposition. In addition to a lingering recession which keeps construction costs and interest rates low, Lauder cited geography as a reason for his change of heart.

As Carol Vogel reports in the Times, Lauder described downtown New York in the way only a 77-year old ensconced in an Upper East Side palace-in-the-sky could:

"Downtown is a new city, a new nation. Why shouldn’t the Whitney be the museum of record there?"

Although he's on to something about downtown feeling new relative to upper Madison, jokes at the Meatpacking's expense are old hat. Can the Whitney help restore the Gansevoort Market's credibility?

Ah, the Meatpacking. It's tough to think of a more maligned neighborhood in Manhattan, if not the city. (Park Slope comes close, but then some number-cruncher reluctantly says it's the best 'hood in town.) Is the hatred overblown? Of course! But it's persistent.

Some of the anti-MPD sentiment abated with the opening of The Standard and the Highline last year. But then hating on The Standard became easy despite its striking, glossy Soviet goulag exterior. The same aspirational nightowls who flooded the area's older, overrun scenes quickly relocated to the elevator bank that would whisk them up to Boom Boom Room (sorry, Top of the Standard), a bar that could easily double as the world's most overpriced airport lounge.

Amateur pornographers flooded the hotel too, which depending on your internet browsing habits sullied a walk on the Highline or made dark shades and a tan raincoat its perfect sartorial accompaniment. 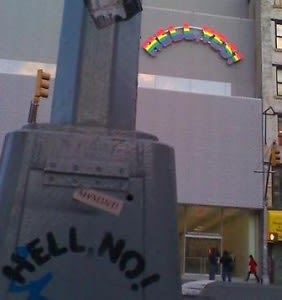 But the best way to gauge the potential impact of the Whitney's new pad requires looking outside of the Meatpacking District. Consider the New Museum's new HQ that opened on the Bowery in late 2007. The eye-catching structure--basically a very tall and uneven stack of gray boxes--got mostly rave reviews. Initial hype deafened.

But although the museum played a part in a welcome profusion of galleries on the Lower East Side, it likely attributed to the continued hyper-gentrification of the Bowery, which forced scrappier cultural institutions out (see: Dixon Place) and brought shiny, happy and expensive newcomers in (see: Double Crown, DBGB, Pulino's). So went the usual, oversimplified cycle: artists move to downtrodden area, galleries arrive to house the work of artists, rich folk visit the galleries, shops and eateries for those rich folks push the artists and galleries out.

Anyway, local skepticism was justified. As the Times put it before the New Museum tape had been cut:

"Here comes the art, there goes the neighborhood."

Of course, you can't blame the loss of an entire neighborhood's character on a single new venue (unless it's Starbucks maybe). And the Bowery was in an earlier stage of gentrification then than the Meatpacking is now. So any new MPD arrival that isn't a high-priced boutique, bottle service club or gargantuan theme park restaurant is welcome.

The new New Museum helped introduce luxury to the Bowery. For better or worse, that was a change. If the Whitney has a similar impact in the Meatpacking District, it will be more of the same.