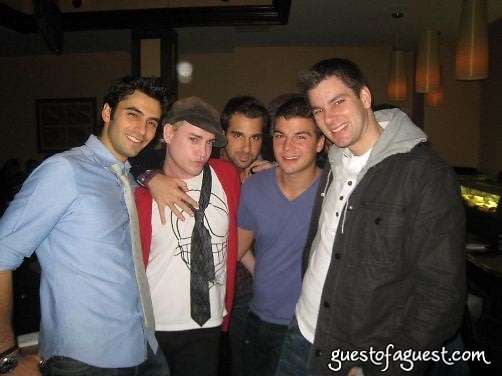 On Friday, Guest of a Guest’s resident Olympians Tim Morehouse and Jason Rogers performed a New York rarity: hosted a party for nothing more chance to see all their friends before the holidays steal them away for the winter. The evening proved to be an interesting scene, and in their words was “a nexus of the old and the new.” That is, old friends including athletic trainers Scott Weiss and Marc Bruck and Olympic Silver Medalist compatriots James Williams and Erinn Smart intermingled casually with new friends Richie Rich, Adrien Field, Nicole Sawyer and Geraldine Laiz (aka Little Richie).

Guests sipped on Green Tea Sake Martinis (the drink of the night) and admired the hip décor of one of Chelsea’s newest, coolest Japanese restaurants, Rock N Sake, which although seeming like an odd place for a Christmas party did not disappoint when it came to providing the requisite holiday cheer.