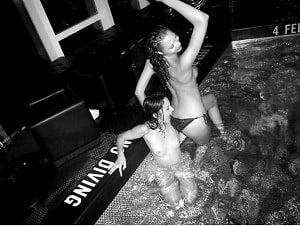 Sex sells. But a fresh lawsuit against The Standard proves it might also make you pay. A guest who was accused and acquitted of attacking a maid filed a $10 million suit against the Meatpacking District promoter lodge, claiming its "racy atmosphere contributed to the false charges against him."

Matthew Moorhouse went to court for attempted sexual assault charges stemming from an incident involving a housekeeper at Andre Balazs' boutique hotel. He was acquitted in July and sued last week in Manhattan Supreme Court after saying the employee trumped up her charges after he caught her looking through his luggage.

Whatever actually went down, Moorhouse argues that false advertising is to blame. News.com.au reports that the Australian businessman "booked into the hotel specifically because of its reputation for kinky, exhibitionist sex." That may not be the best way to clear one's name. And The Standard's thoroughly corporate "raciness" is obviously no excuse for non-consensual licentiousness.

But is it getting risky for The Standard to be so frisky? Just last week we wrote about the hotel's "lifestyle" website which features coy photos of supermodel spooning and hot tub disrobing. Speaking of Lifestyles,  the entrance to The Standard's rooftop boîte Le Bain features a nearby condom dispenser and the highly dubious turn-on of flamingo pink water beds. And, of course, there was the hotel encouraging early guests to get it on in full view of pedestrians on the High Line, which the Brutalist pleasure dome straddles.

Even if a judge considers Moorhouse's suit full of hot air, The Standard might consider taking a cold shower.