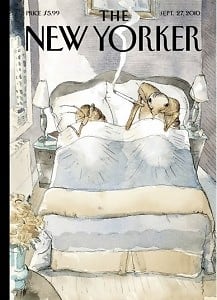 It's been three months since we reluctantly reminded you of the bloodsucking monsters taking over the city. A few years after making a wholly unwelcome comeback, the pests that were until recently relegated to quaint bedtime rhymes made their New York retail debut and infested the gargantuan SoHo Hollister flagship this summer. Citywide chaos ensued and tourist bus routes were rerouted until Hollister dubiously claimed to have gotten rid of the tenacious creatures two days later.

Barry Blitt is the illustrator to thank for the New Yorker's reminder that the bedbug nightmare will stick around as summer turns to fall. Blitt's the man behind the New Yorker's infamous July 21, 2008 cover of a terrorist fist-bumping Michelle and Barack Obama. The man clearly knows how to ruffle feathers and, in this case, feather pillows. Just wait for permamayor Bloomberg to gripe about these suddenly timely parasites enjoying an anachronistic post-coital cigarette.

Meanwhile, ask yourself which among bedbugs, Snooki and Heidi Montag is the least likeliest pest to have made it into the New Yorker in 2010.