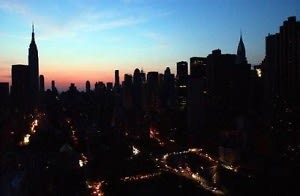 A plunge into darkness can illuminate. The last two major blackouts in New York, in 2003 and 1977, were like flashlights shined on very different cities, one at peace and one in chaos. As the local media continuously predicts a recession regression to the bad old days, how would New Yorkers react to a blackout today? -

You may have noticed it's a hot one out there. People have already lost power in the Bronx. And those millions of air conditioners cooling away could lead to wider outages. Luckily for our armpits, it's unlikely that there'll be a citywide grid meltdown. But as a hypothetical, it makes you wonder if a meltdown would lead to a breakdown.

On the night of July 13th, 1977, a lightning strike upstate blew out two circuit breakers, leading to a blackout that left nearly the entire city dark. Several neighborhoods, most famously Bushwick, descended into near anarchy as looters took to streets that were already fraught with tension (thanks to a fiscal crisis and the Son of Sam serial killer) and ransacked local businesses. 4,500 citizens were arrested and nearly 30 fires still burned in Bushwick the morning after. Spike Lee's Summer of Sam was a panoramic take on the reeling city of 1977, with the blackout at its center.

The next big blackout came on August 14th, 2003. It affected not just NYC, but most of the northeast. Despite initial fears that the outage was terrorism-related, the event was an improbably happy one in a city flush with cash during the boom years. The most enduring image was not of riots but of commuters organizing spontaneous carpools and restaurants giving away their perishable food, no looting necessary. 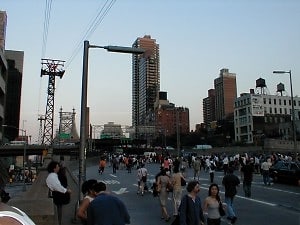 Today the big news is the heat wave. But possibly exaggerated fears of a local crime wave have popped up in the press. Just this morning the Daily News covered a spike in violence in the Bronx while The Lo-Down observed a jump on its home turf on the Lower East Side. Then again, crime is still near the lowest levels since the early '60s. And Bushwick, the epicenter of unrest in '77, is discussed, perhaps misleadingly, more as a breeding ground for hipsters than crippling poverty.

Maybe the best is to hope that the question of what a 2010 blackout would look like remains a question contemplated in an air conditioned room.